My primary gaming computer suffered an unexpected melt-down last week. While I scavenge parts to replace it, I must turn back to the consoles. However, I also have my bi-weekly Dungeons and Dragons game to look forward to.

Yesterday was the first time that an entire party has died at my table. Some GMs would consider this a badge of honor, but for me, since I try to balance encounters fairly, I am not entirely happy with it. The problem was that this particular encounter was simply part of the world, and was set up for the players to encounter much later. They also were down a player, and it might have made the situation a little more tenable had he been around. This combination of problems meant they just weren’t fully prepared to handle the situation they had gotten in to.

Fourth Edition is a little odd in this respect: it’s fairly hard for one player to die, but once one does, others die in rapid succession and this can often cause a full wipe. That means it’s also more difficult for things like resurrections to happen, especially in the heroic tier. I’ve heard a lot of stories about party wipes in 4th Ed, but less stories about just one dramatic death.

Here is the true story of yesterday’s party wipe. I will leave this as a memento, a funny story, and as a word of caution.

The campaign is a water-focused campaign that takes place in a coastal area. The players have access to a ship, where on the water they may encounter pirates, maelstroms, and the occasional Crab Battle. This particular segment of the adventure had taken the players to a coastal swamp created by a river delta. The place was basically inspired by a drive down past the Everglades my husband and I took last year.

The group was actually there seeking out a cult run by Bullywugs. The bullywugs (frog-men) had a key item – an important book – that the group was looking for. The seeds to find their location were sewn by taking down a group of Orcus cultits that had hidden themselves in the coastal down where the PCs were keeping port.  (Aside: honestly, I find the Fourth Edition depictions of the Demongod Orcus to be uninspiring. I liked the guy better when he was a fat slob, possibly with demon babes chained to him. Now that he’s gotten on the steroids, he seems less interesting. Nevertheless, I had a party member – an Avenger of Bahamut – who was gung-ho to take him down. So I had worked his cult in to the campaign, to some degree.) 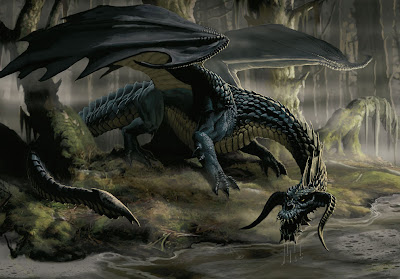 The party was adventuring through the swamp when they passed by a suspicious, dark-looking pool. As I made a point of drawing this on the map along with other terrain features, a player responded that he was guessing there might be a Black Dragon ambush in this adventure. So much for that being a surprise, but he was right on. The Black Dragon was a Young Black, a level 4 solo, which was an even-level encounter for the party. The party didn’t have much of a problem taking him down, though they were a little worn out afterward.

They were surprised to be almost immediately ambushed by Lizardfolk. But the lizardfolk turned out to be from a friendly tribe, and offered them potions and trade. They were happy that the dragon had been killed, as he was an ambush predator that bothered the tribe quite a bit when hunting. However, they also mentioned there was at least one dragon left in the swamp, which was the sire of the dragon they killed. He was older, and the group would be wise to avoid him.

However, my party was used to ignoring warnings like this (though they were usually delivered by villains trying to intimidate them, rather than friendlies). They tried to get some intel about the older dragon by asking lizardfolk, but most of them had not seen him up close. Those that did, didn’t tend to live for long, and the older dragon only hunted at night. Reports varied, the most common one being that he would be about twenty feet stretched out – another lizard said as much as thirty. But none of them could really corroborate this story. (I warned the group out of character that, even an adult Black was still only ‘Size Large’. Size wasn’t necessarily a great indicator since the ‘adult’ years cover a large amount of space. So the party knew the dragon was at least an adult.)

They opted at this point to get a few cloaks made out of the remains of the smaller dragon, so that they could wear it as a trophy. I suppose this is fairly standard D&D party behavior. They were eager to spread the word that they had slain this dragon, and on returning to town, made sure that this was well-known.

Taking down the frog cult involved a large underground dungeon. The party fought the NPC cult leader, a custom-designed Elite that I was rather proud of. He was a horrible bullywug/human mutant, and his primary sins were sloth and gluttony, rather than the wrath that Orcus cultists are known for. Grown lazier as the years went on, he was already mutated by black magic. The result was a creature so fat that he couldn’t walk well under his own power, and instead had conscripted slaves to carry around a massive amphibious raft on which he would sit. This made for a slow escape, and the players successfully navigated the dungeon and wilderness well enough to track down the leader and destroy him.

With his raft seized, and large enough to hold several party members, they felt they were ready to take on the dragon leader. They had pretty good intel about the location of his lair. But I had a player quit right around this time and I had retired his character, so they were down to just four members. The swamp dungeon had taken them to level six. An Adult Black Dragon is a level 11 solo. They were tough, but… not really ready for this.

This was designed as a fairly bog-standard — pun intentional — black dragon encounter. The dragon had its own lair with two entrances: an underwater one considered the front, and a back door hidden in a muddy hill. The group approached by way of the front entrance, the entrance that they knew about. It was a large, murky, still pond in the swamp.

The party had confiscated the Frogman’s raft. The party Avenger got on to the raft and moved out to the center of the swamp, wearing the black dragon cloak. He yelled in to the pool that he had slain the son and was here for the father… while the rest of the party tried to hide in ambush.

One does not get to be 500 years old and fall for obvious tricks like this. Uthazog the Black did not care much for going out in to broad daylight to do any such thing. (He was annoyed, but ultimately if one’s offspring underestimates a well-armed group, it was the offspring’s fault for thinking they would be easy prey. Black dragons are not really loving parents.) He decided to wait.

One of two things at this point had to happen: either the party would have to advance in to his lair themselves, or, they would back off for a while. The second plan would have involved a rest in the swamp, and if they waited the night, the dragon could ambush them under cover of darkness. This might have been slightly more advantageous than going in to his lair, because they would still have the option of retreat.

However, the noise they were making here caught the attention of a small party of hostile lizardfolk. They said the dragon was their tribe leader, and the adventurers should leave now if they knew what was good for them. They tried to attack, but were fairly outmatched. One of the lizardmen laid down his arms and surrendered. He made an offer out of cowardice: he would show them the secret back entrance to the lair. There were traps, but he knew how to get around them (this was a regular trip for lizardfolk, who would bring gifts to the dragon). He also mentioned some guards: these were actually kobolds, who were the ones who constructed the traps. (I rarely use kobolds, for reasons that would require a rant. I suspect the group might have expected something worse here. But the danger of any kobold group is the traps they set, not the kobolds themselves.)

The party avenger used Bond of Pursuit on the lizardman. It was a power he had been waiting to try out. Essentially, as long as he maintained it, he would always know where that lizardman was, which should make it easy to follow him to the secret entrance. Then he told the lizard to go, and they would meet up with him there after a short rest.

The lizardman ran off in to the swamp.

The avenger then said that they were going to go for a frontal assault.

This was a bit of a surprise to me, but his logic was this: if the back entrance had guards, they would all be preparing now for the group to come in that way, so, by going in the front, they should only encounter the dragon now.

Sound enough, but going in through the front involved swimming down in to the entrance, which was a deep, murky pond. It was difficult to see and they weren’t sure how much swimming it would involve.

So, by not securing another exit, they had no means of escape. They were also going to be outmaneuvered easily by the dragon, who had a fast swim speed, and they would have to hold their breath often.

It was a bad plan.

Nevertheless, the situation looked possible, at first. There were a few patches of dry cave in the lair, including the one where the dragon kept his treasure, which is where the fight eventually migrated to. The dragon dropped a cloud of darkness here, which made the “hard to hit” AC 28 beast now next to impossible for the blinded group.

The party got the dragon down to its last 100 HP before members started dropping. At this point, they were out of powers, the dragon was out of powers, and everyone was using basic at-wills. Near the end, I started to feel bad, but I was rolling attack rolls out in the open because they were so critical. I admit that out of pity I nerfed a few damage rolls at the wire, but there was no way for them to pull it out… and no real line of retreat, either, unless they wanted to swim away from a faster, more maneuverable beast.

Incidentally, no one was mad about the fight going sour. They felt they had plenty of warning that this was probably out of their reach, and they acted a bit too cocky about their odds of success. Since we’re going to take probably a month and a half off for con season, at this point, it’s a good time for them to put together a new party. And maybe some day get their revenge.