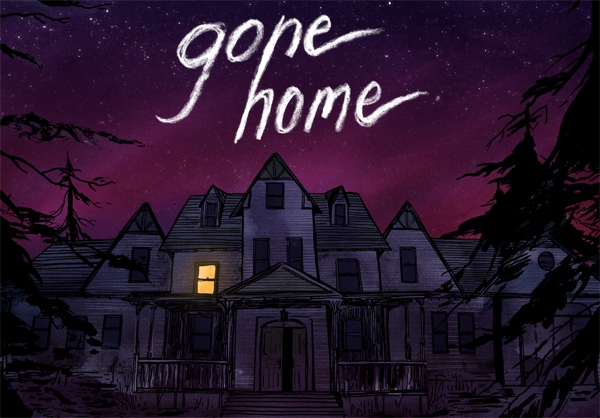 I was excited about Gone Home, the environmental exploration game, when I heard about the premise, and since it’s a fairly short game that isn’t challenging in the traditional sense, I was able to block out some time to play it. It seems there are a lot of blog entries going up about this game this weekend, so I wouldn’t be surprised to see a Critical Distance roundup for it or something come next week. 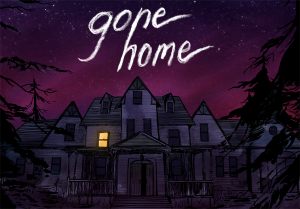 My thoughts on it turned out to be different from most other thoughts I’ve read. So I feel like it’s worthy to weigh in. I really liked the game but it wasn’t perfect for me either. For one thing, it ran a bit slowly on my older laptop, which is unfortunately the primary machine I’m using for gaming right now due to a variety of moving-related factors. So it was a bit of a slideshow which hurt the impact.

Any other comments will have to be mired in spoiler territory, but before I go into that, I will say it got the 90s-teenager-nostalgia just right for me. I was also a teenager in the 90s and though our house wasn’t the mansion depicted in Gone Home, there were a lot of similarities, too – the wallpaper, the unfinished basement, the cheap blue nail polish, the glow-in-the-dark stars on the ceiling, the Oujia board tucked in a back closet. Every once in a while in the game there was a moment that reminded me of something from being a teen in the most obvious and non-obvious way. And that was very touching and a big part of the value of the experience.

Also, I am totally on board with Christmas Duck being the new Companion Cube, because having a house is all about those weird Christmas decorations that don’t make sense. Christmas Duck plushies should be a thing. Just saying. Good ol’ Christmas Duck.

So another big reason I wasn’t totally blown away by Gone Home, even though I enjoyed the game, was that I called the ending about five minutes in. I saw a note that said “don’t tell Mom and Dad what happened” and a note that said “I don’t want to hang out with Daniel anymore because he’s getting weird.” That was all right in the first little area, and I thought: this is the game that pulled out of PAX because it has LGBT content. Okay, so the reveal at the end, I said aloud, to my husband nearby, is the sister has run off with another young lady, because she’s gay. After deciding that, I wasn’t really buying into any of the other clues the game threw out about there being ghosts or this being a murder house. Those moments were spooky, but I was pretty sure the situation was going to be something mundane, and there was enough evidence throughout (ransacked drawers and missing VCRs) to support my suspicions. 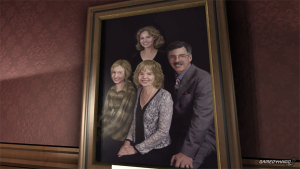 Hubby didn’t want me to be right that quickly, but it was what it was. The way the story was laid out was very neatly done, and, though the lesbian bit comes out early enough, there’s still the possibility of something like a suicide pact or something gruesome and worrisome near the end. I stood by my “run away” choice even after seeing a pentagram, because leaving a note that says “don’t let Mom and Dad find out” wouldn’t have made sense in the context of a suicide.

So… I can’t entirely identify, because I’m straight…

Oh, god, hold on. Okay. I’m sorry, I don’t want this to sound like whining or anything. I realize that as a straight woman I’m privileged. And I am the sort of straight woman that’s sex-positive and sometimes enjoys sexualized depictions of other women, which if you believe in queerness as more of a scale thing, then I don’t tip the needle all the way on the straight side. But I don’t really consider that a part of an identity that I have, and every sort of awakening or watershed moment that I had has been from the straight point of view.

And it’s very hard to express this, but it feels like video games kind of sidestepped straight women? Question mark because I’m not saying this in an authoritative way, but more in a, am I the only one who feels this way, way? That’s one of the reasons I was so eager to write a little about Everlove when I heard about it. It’s solely about a straight woman having sex with men. How rare is that? It’s not completely rare, no, but it’s pretty rare.

I was thinking about Remember Me, and the backlash against it starring not just a woman, but a straight woman. That would be awkward because you can’t make the player “kiss another dude” in the game (presuming that the player is a dude, naturally). And I was thinking about how in most early games, when there was a romance to play out, I did it as a man picking up women, because that was what there was to do. And I was thinking about how in a lot of games there’s a woman-on-woman relationship, because designers put that woman in the game as a love interest for a man, so why not go ahead and open that up for both genders? So it took until the second Mass Effect game for a female character to have more than one male romance option, for example.

I get that this sucked even worse for gay men, who got nothing in the first Mass Effect game at all. I’m not saying it’s bad that there’s homosexual options in games or that games are increasingly inclusive across-the-board. I’m just saying that sometimes it feels like, in a world where at first women at all were a bit of an afterthought, in a world where the trappings of “the feminine” are already frequently dismissed, it feels like straight women haven’t quite carved a niche. 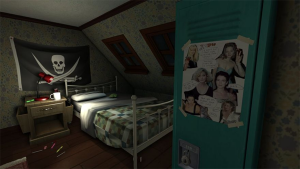 As a thought experiment I wonder what Gone Home would’ve been like if it were a straight-girl story. It could’ve gone the same way, generally: maybe Sam’s potential boyfriend still has to choose between her and ROTC; maybe they still have to sneak around to have sex; maybe there’s some other thing keeping them apart, like he’s a different race or he’s lower-class and the Greenbrier parents just don’t approve. Maybe she writes the same sort of little diaries about sexual confusion, and maybe she comes to the conclusion she really likes this guy, and they’re going to run off together.

It just doesn’t feel as important somehow, but it would be no less real, right? But it would feel kind of less weighty. And I think the same exact writing voice for Sam might’ve come across as a ditzy and frivolous giiiiirl if she just had a crush on a boy. It’d be less triumph and more… Twilight.

And I’m thinking about the mother character in Gone Home and I’m realizing that, aside from Katie, who is just an avatar, Jan, the mother, is the most under-written character. Most of her story is about how she’s away from home often, so it makes sense we hear less of her, and maybe I missed a scrap or two of her story in all the piles. But she hasn’t seen a lot of evaluation in the same way that Terry’s side-story has seen.

We do know that Jan is a Christian and she reads the Bible and, hey, it’s nice to see a straight, Christian woman in a video game who isn’t portrayed in an entirely demonized fashion. She’s sympathetic even if she’s still a bit of the villain to Sam’s story. There’s been so much Dad-based content in games, lately, and there hasn’t been so much a corresponding increase in “Mom” content, so it’s nice to see a mom at all.

Yet Jan’s not the most interesting character in the game. I think Sam is the most interesting character in Gone Home, and that’s by design I’m sure. I like reading her writing as it develops and hearing her point of view and I empathize with her often throughout. I want to learn more about Katie, because I was the oldest sister in my household, but as the avatar she’s never given too much to say.

I’m happy to have a game about a family and a game that’s about sisters growing up. Gone Home works very well telling the story that it tells. And ultimately I think the success of Gone Home isn’t so much what the story is as how it’s told in the environment design. (Which is a little too on-the-nose sometimes, but games are getting there.)

2 thoughts on “On Gone Home”