The game jam at Philly Dev Night this month was a huge success! I was really happy to be able to sponsor such a cool event and participate in playing all the games!

The secret theme that we announced at the event July 2 was “Move your body.” This year I’ve gotten really interested in gamifying ways to get fit, between Xbox Fitness and Fitbit… and I was wondering what other great movement-based game ideas that people would have. Microsoft sponsored by catering the game showcase on July 16. Here’s a look at some of the games! 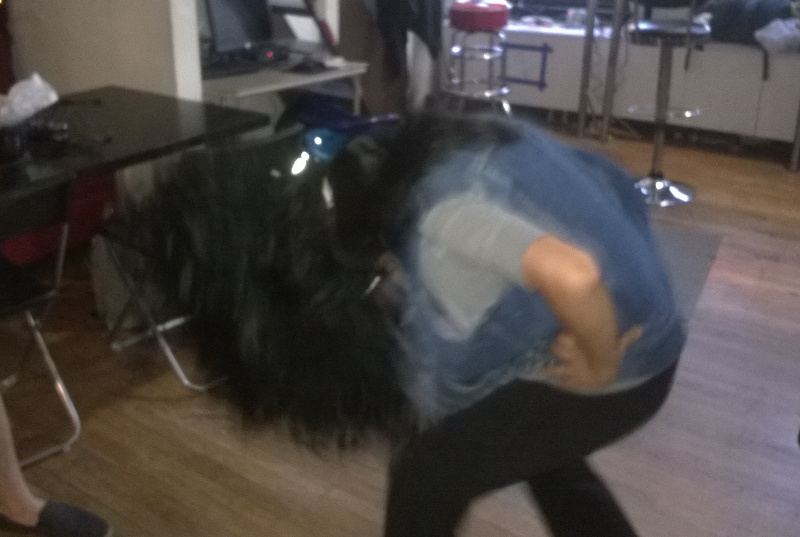 The crowd favorite game (by popular vote) was Headbanger. Headbanger consisted of an iPhone attached to a long-haired rock ‘n’ roll wig. Music played (through hooked up speakers, so the crowd could also hear) and the headbanger player had to bang his/her head in time with the music. Pictures were hard to take because the headbanging was so fast and furious! 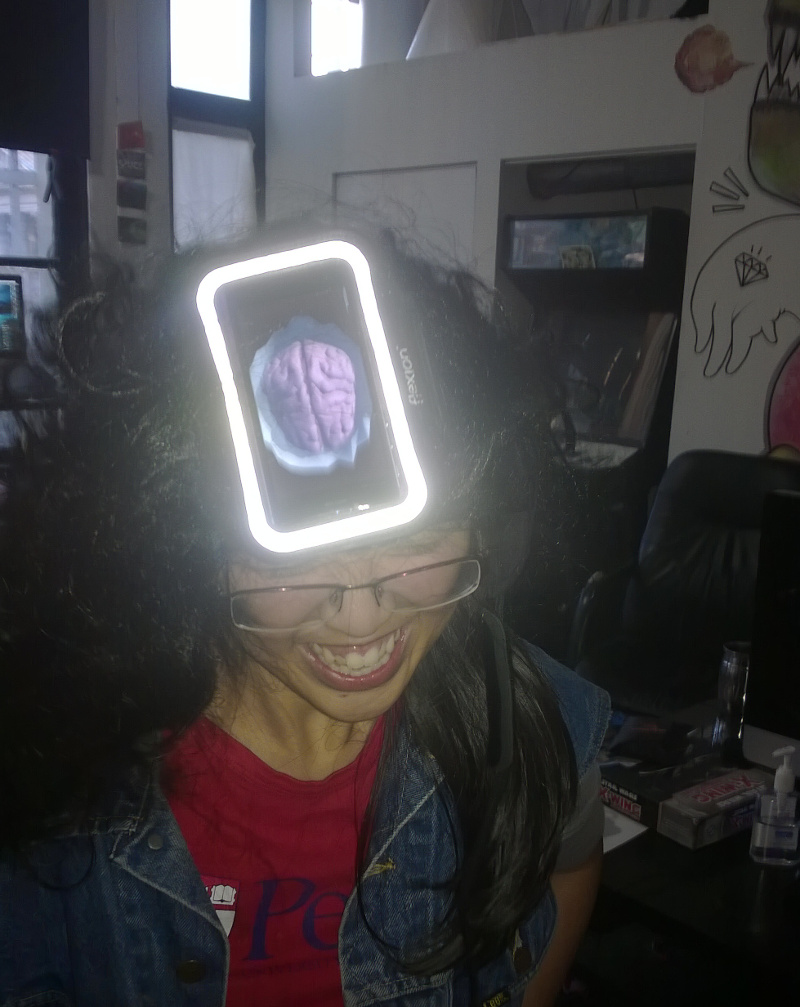 Up close: a scrambled brain

Dancing Master used up to four Xbox 360 controllers to control feet on the screen and step in time with music. The twist is literally twisting…. The controls for the game involve using one stick and set of shoulder buttons, on each side of the controller, for each foot. It was surprisingly difficult to get things to line up! But it had a great selection of music and was fun to watch.

A few games were on the iPad – one rolling ball demo involved holding the iPad still to avoid the ball onscreen rolling off. Drumandala was developed as an iPad or PC game, but worked better on the touch screen, using fingers to tap shapes in a shooter-like, but zen, atmosphere.

One jammer took the theme “Move your body” literally, and made an adventure/stealth game about how to most effectively hide a corpse. This was improved by the addition of sloppy awkward ragdoll physics on the corpse… oh, and Will Stallwood’s photograph attached to the head for an ounce of realism. 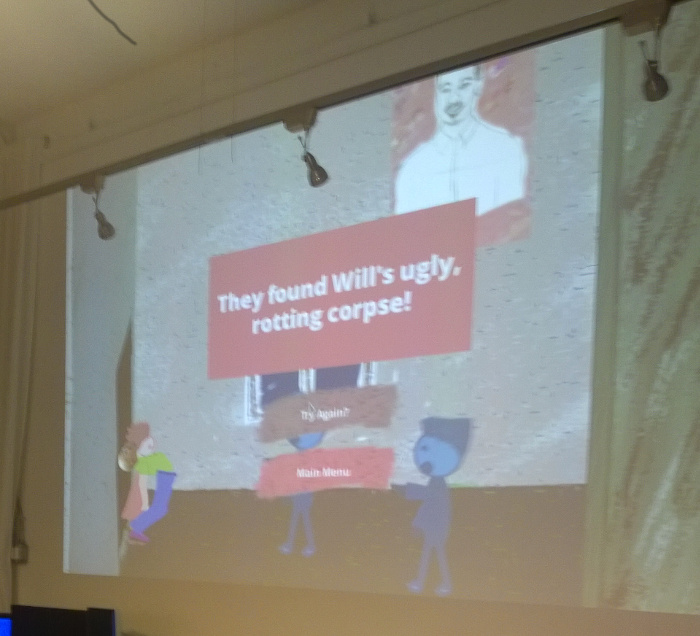 A couple of non-digital games were also displayed. Jake O’Brien called his game entry  Sight is Over Rated. Two teams worked together, with one blindfolded member and one member telling the blindfolded teammate how to move. The object of the game was for the blindfolded team mate to pick up cards from the table while avoiding an obstacle course of cups.

Safari Sock Hop was another purely analog game, involving pantomime to music. Cards handed out to two two-person teams told them what animal to mimic, and what type of dance they should do while pretending to be that animal. Here’s a tap-dancing octopus, for example: 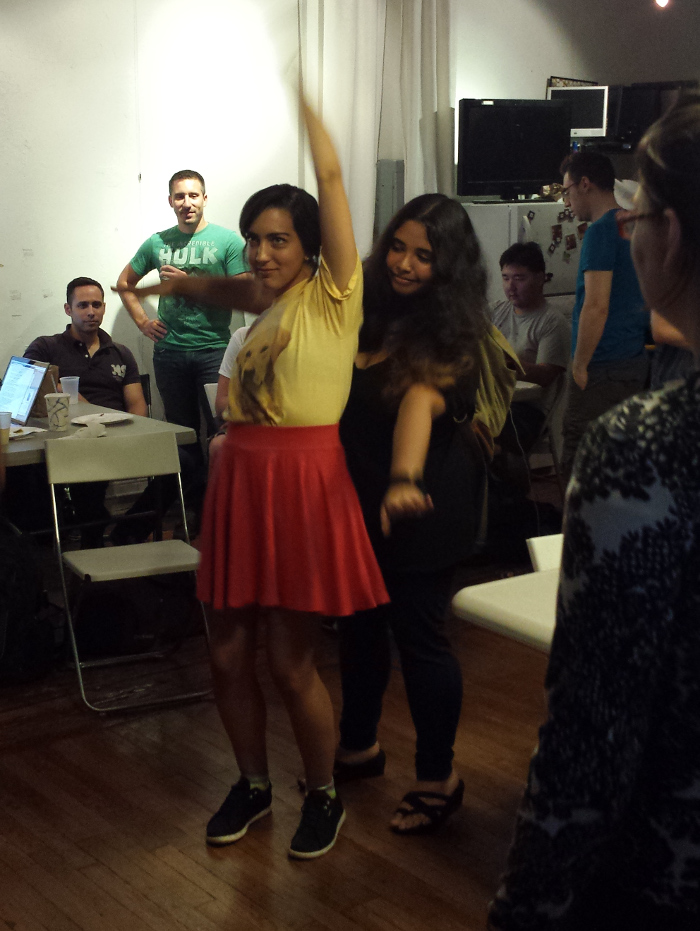 My personal favorite game of the jam was Cipher Prime’s game, which was just called Bodies. This game encouraged all the players to get up and walk around the city, several blocks around the building. Their smartphones would give them a “hot and cold” interface when they were close to a point of interest, and then when they were close enough, a riddle appeared onscreen. If they took a photograph that matched the answer for the riddle, they got a point. Cipher Prime wants to eventually expand this game to allow people to create customized geotagged scavenger hunts for each other. 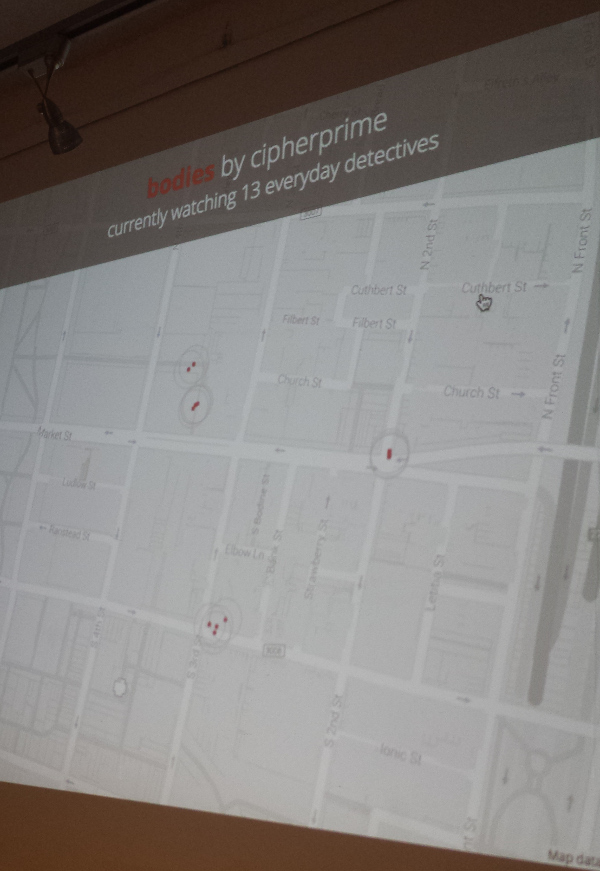 I was really proud to take part in this jam. The games were great and there was a ton of energy! Thanks to Philly Dev Night for a great time! For the curious, Dev Night does game jams monthly! Just check the schedule at http://phillydevnight.com.