I started writing this post a few months ago when the Super Meat Boy Post-mortem showed up on Gamasutra, but I never got around to completing my thoughts.  Fortunately, the timing of a video post-mortem on GDC Vault gives me another relevant link to share in regard to the game.  I actually bought Super Meat Boy when it initially came out – multiple times, as it turns out – but it ended up in my backlog for a little until I got the encouragement to bring it out courtesy Valve’s Potato Sack promotion.

Super Meat Boy is such a game.

Why I Bought Super Meat Boy

When I went to PAX in 2009, within my bag of convention swag there was a comic book, drawn with crude little characters and containing a tongue-in-cheek “about the author” section.  That section included this photograph. 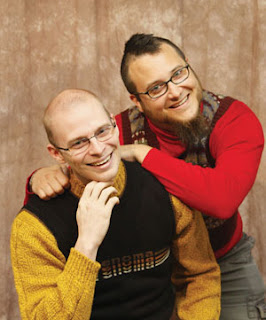 Since I go to a couple conventions a year, I got the same comic, with photograph, when I later attended GDC in 2010.

My thought at that point was, “Who are these guys??”  My second thought was “I will probably give them some of my money.”

How the Game Is Played

Super Meat Boy is played with a controller, typically the X-Box 360 controller. Yes, I have the PC version, but if you’re trying to play it with your keyboard on the PC you’re probably some kind of maniac.  The proper hand position for the controller is to place one thumb on either the thumbstick or the D-pad (personal preference here seems to be thumbstick. The D-pad would be more ideal, but the 360 D-pad really isn’t very good), and the other thumb draped over the “run” and “jump” buttons in a double-coverage manner.  The proper playing motion is to manipulate the run button with the tip of your thumb, while compressing the jump button with your thumb joint in a light squeeze when it’s necessary.

The right-handed side of this playing motion, which I will authoritatively state is the only correct one, feels really good to me.  That’s because that’s the same compression motion that I used to get through Super Metroid (after reconfiguring keys) and all the old Megaman X games on the Super Nintendo (Megaman X now available on Virtual Console for Wii owners, if you haven’t played it, go go go).  In that case your thumbtip is holding down the “charge weapon” button while your thumb joint jumps, but the principle is the same. In Megaman X if you wanted to dash and jump, you either had to double-tap the D-pad in the direction you wanted to go before jumping, or employ the advanced “finger bend” motion displayed below to hit all the necessary buttons at once (yes, I really played the game this way). 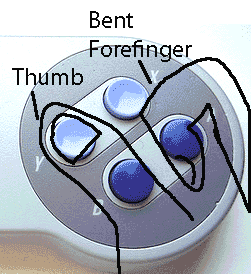 In Super Meat Boy that button at your thumbtip (On X-Box  controller, it’s X, if you were on the SNES, it would be Y) is “run,” and you ought to be holding that button down.  There are obviously times where you may have to let go of it in order to time a jump more carefully.  Those times are much less frequent than you imagine.  I discovered pretty quickly that the game is absolutely balls-to-the-wall.  If at any point you have to stop yourself, in order to time a jump more properly based on a moving obstacle placement, what really happened there was you didn’t do the previous section fast enough.

How Do Games Mean?

Like a lot of people who played it, I don’t think I understood the game Braid when it first came out.  Jon Blow’s annotated playthrough sheds a lot of light on the subject of the game’s meaning, so it’s a useful video to watch even though it takes a long time.

The game has a lot of prose in it, a lot of this and that about relationships and maybe the atomic bomb.  It’s really sort of highfallutin stuff and lead to a lot of people calling the game “pretentious,” which was probably not the intent.  The real way to get meaning out of the game is to largely ignore all that written stuff, or at least ninety percent of it; consider it a red herring or maybe just a series of footnotes.  Look instead at what the game is doing with its mechanics and dynamics and how they change from level-to-level.  Taken in this way, Braid is a series of poetic vignettes about different ways to look at the passage of time.  Does time move forward because we can only observe it doing so?  Does time bifurcate the universe, creating alternate timelines with every decision?  Why does time move more slowly closer to a singularity?  In mechanical terms the game is exploring these ideas the same way the book Einstein’s Dreams explored them with prose.

At GDC this year Clint Hocking gave a talk on “How Do Games Mean.”  Not what do they mean; that, of course, varies, but instead asking the question “what is the thing within a game that gives it meaning?”  His argument was that the primary unit of game meaning was its dynamics – the combination of its mechanics and rules that within the game boundary caused something meaningful.  Dynamics are distinct from mechanics in that they encompass not just the mechanic itself but how the mechanics work together.  The mechanics of Braid are run, jump, rewind time, etc; the dynamics are how these ideas interact with the level design to create puzzles.

Going back to the game I’m ostensibly writing about, Super Meat Boy is a member of a subgenre of platforming game called the “Masocore” genre.  A masocore game is characterized by having lots of difficult levels, instant death obstacles, and infinite lives in which to explore that space.  The only penalty for failure is to try again until you succeed. 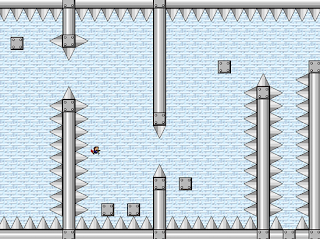 Probably one of the earliest experimentations in the genre is the game “I Wanna Be the Guy,” a game about humorously subverting the expectations of the platforming genre by hurting you in different unusual and surprising ways.  Do those shiny apples look like something you want to collect?   Nonsense, they will kill you. Some of them will fall upward to make dodging them more difficult. …And they’re really more like giant cherries.

If I had to guess at the inspiration for more or less this entire subgenre, I would look once again to Megaman, though more specifically Megaman 2 and possibly 3.  If I had to narrow it down to one screenshot, it would probably be something like this. 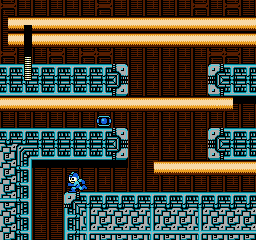 Though you have a life bar in Megaman, the games are known for their clever instant death puzzles.  It’s so much to the point that I would probably call Megaman 9 itself a masocore game, or at least clearly inspired by the different evolutions of the genre that have happened since Megaman 2.  The only thing missing from 9 is the unlimited lives, though with continues and save points the lives are functionally unlimited.  I would consider myself a fan of the genre, even if I’m not great at the games. I love Megaman 9, but I’m fairly terrible at it, which is probably a personal failing of sorts.

The Hand of the Author

In Super Meat Boy the mechanics are that you run and jump. You can stick to walls. If you die, start over.  The dynamics are that most things in a level can kill you while doing this and for the best experience you should do this as fast and as courageously as possible.

For an example of how this works, here’s a screenshot from an early level, called The Sabbath. 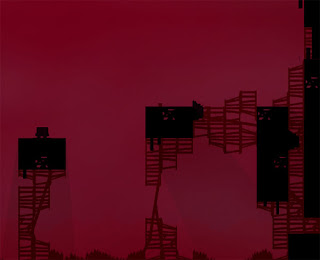 It may be a bit hard to see, but you can click to size it up.  You’re the square thing on the far left.  The fuzzy blobs in the darkness are slimes that move around; they are obstacles to avoid as one hit will kill you.

If you weren’t very sure of yourself, and you were new to this game, the thing you’d probably want to do is carefully time each jump to avoid the baddies, and then slip down the small hole on the far right. That would be a series of timed jumps, like this. 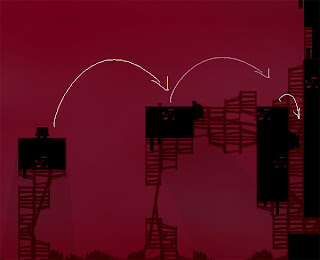 That would probably work eventually. It would also be wrong.

The moving creatures are timed so that, if you jump immediately, at your full possible speed, you will slide right to the correct spot without any hassle.  That looks a little like this. 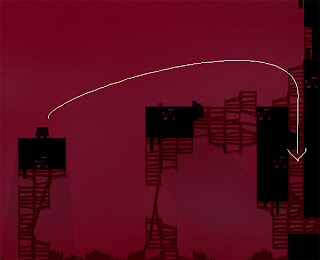 Now not only is that a faster way to move through the level, it’s also, actually, the easier way.  Only one jump, which you’re guaranteed to make, is much easier than trying to time many multiple enemies.

The next few jumps of the level work in much the same way.  Here’s a YouTube of a fast and successful run.  Notice how many platforms aren’t even needed to make it through the level.  Most platforms that are dangerous can in fact be easily skipped. The enemies are timed so that the fastest possible run will also be the most successful run.

Super Meat Boy is a game about courage and determination. This aspect of the mechanics states it well. The braver you are; the more you commit yourself and the more aggressive you are in pursuit of your goals, the better off you will do at the challenges in the game.  If you stop, if you wait, if you hesitate or are tentative, you will get crushed.  The penalty for getting crushed isn’t bad. Just start over.  But the fact that hesitation or slow motion is what brings you failure might be seen as the message of the game.

I find this fascinating in parallel with the attitudes of the developers.  It really is a powerful message articulated through mechanics.  From the Gamasutra Post-mortem: “We couldn’t push to spring, and releasing without Microsoft support seemed like suicide, so we went all-in and attempted to do what would take any team four months within two. These two months were easily the worst months of my life. The pressure, workload, and overall stress of development was extremely overwhelming. In those two months, neither of us took a single day off of work, working 10–12 hours a day, every day.”  In the video post-mortem, Tommy Refines states it a bit more succinctly: “I almost died.”  “I’d be dead,” he says, if he had to port the game to one more console, and he claims he is not joking.

I believe him. But the post-mortem is just an underline under the message that’s already in the software.  Inherent in the core mechanics is this idea of pushing yourself to the fullest, and being the bravest person you can be.  Love deeply. Take the leap of faith.  And if you can, have a good sense of humor about it while you bleed, bleed, bleed, all over your work.

(Some pictures in this article are courtesy Google Image Search, with thanks to original screencappers. Some courtesy my own quick fumbles in Photoshop.)

One thought on “Very Fast, Made of Meat”