I’ll hopefully make some others, though I’m working right now on hotel wireless. 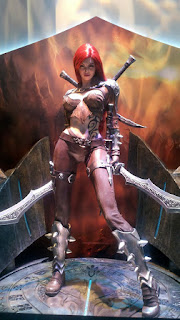 One thing that’s missing from my roundup post is a special shout-out to League of Legends.

I’ve tried out League of Legends a little, but I haven’t played it enough to say I get at all what’s going on. The fact is, I’m big fan of games with story, and I try out a lot of different games. Combine those factors, and sticking with one multi-player game long enough to get really good is a big challenge for me. That goes double if that multi-player game isn’t a fighting game or a shooter, two genres I know fairly well, and triple if the game has no proper single-player mode on which to learn the basics.

Suffice to say, LoL so far eludes me. When my friends go on about AD Carries and Bottom-feeding from the Top or whatever, I wonder if that’s how I typically sound to non-gamers all the time. Enough of my friends play it that the number one question I got fielded to me about my impending PAX trip wasn’t “can you check out X while you’re there,” but was instead, “can you pick me up some LoL codes?” And then they go back to talking about how, like, Teemo can pentakill. They aren’t even using me for my witty game writing and secret info. I’m just a warm body to stand in a line.

So here’s to you, League of Legends, with your inscrutable terminology and your improbably-busomed women-folk. Maybe some day I’ll get you. In the mean time, I’ll keep a set of codes for myself.

One thought on “I’m at PAX East this weekend!”