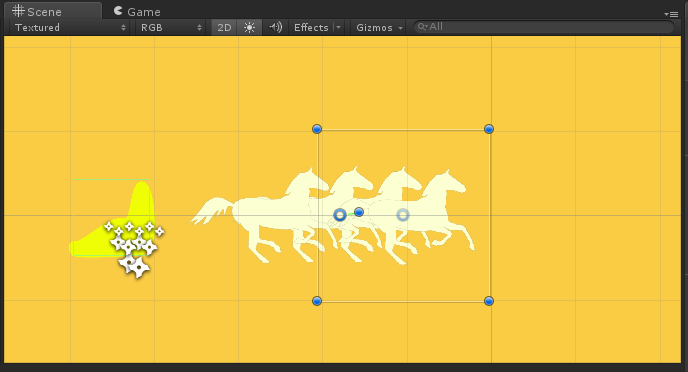 This part of the Sun Run project is the part that has taken me like, forever. Hopefully in this post I will be able to condense what took a lot of trial and error for me into some quick useful help for you.

What I would like in this game is the feeling that the player drives the horses, but needs to protect the chariot. Basically, ropy physics to make the avatar feel snake-like, so the control over the chariot is slightly indirect. Here’s the little most primitive diagram of what I’m talking about: 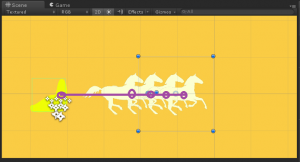 I started out with keyboard controls, but then added some mouse controls as well, so the player can use either tapping the top and bottom of the screen to move the chariot up and down, or use the arrow keys on the keyboard to move it up and down. I decided to try uploading the codes (it’s just the code for now, not the assets) to my very quiet GitHub, so if you want to follow along you can check them out there. I’ll update the commit periodically. Here’s the current version of the runner script. I’ll end up updating the code later to be sure it has proper touch control listening too. But what’s key here is that I put the code module on the front horse, and not on the chariot itself.

To make a chain in Unity you can use Unity’s 2D physics Hinge Joint. Each horse has a RigidBody2D and a HingeJoint2D, and they’re connected in a line, then parented to each other to allow the chariot to drag behind each horse. These are the settings currently on, which will probably be tweaked later (but this is already a result of a lot of tweaking…) 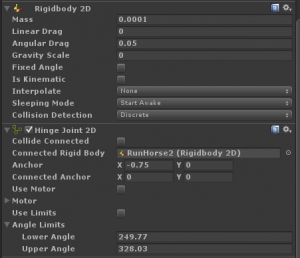 RunHorse1 (the front horse) is connected to RunHorse2, and so on, all the way to the chariot itself in the back. With four horses connected this way to a final chariot sprite, the control feels pretty tight, with just a little bit of slack behind. The -.75 on the chain anchor means that the horse connects to the horse behind it with a little slack instead of directly. The setting between the last horse and the chariot is at -1. I experimented with angle limits, but I didn’t like the result, so they are off for now. Notice there’s no gravity on my front horse and very little mass. If I use gravity, the horse will just fall, so away it goes! The light mass also means it’s very easy to control. Each horse has the smallest possible mass and the chariot itself is set to 0.003. Right now I’m keeping everything very light so the control feels tight, but if I want to make things harder to control, increasing the chariot’s mass makes it drag the whole chain down and is one way of doing it.

I’ve done a little playtesting with these controls and they feel “okay,” but maybe a little easier than I’d like for things to be. Some early feedback I got was that the primitive chariot sprite has a pretty unclear hit box. I’m actually using a particle system to make the chariot burst into flames… it’s so pretty, but I fear it hurts the clarity of the game, so it may have to go. Also, I’ll need a better chariot sprite and to make sure the enemy hit boxes are clear as well. Work for next time…