Yesterday I went to the Pennsylvania Academy of the Fine Arts. Primarily, we were there to see the David Lynch exhibition, because David Lynch is great. While we were there, though, we browsed the entire gallery. I always found history dry in school. But in a museum, I love looking at history, partially because it’s so interesting to see what things were different in the past, and what things remain the same.

In a salon-style gallery in the Academy, this picture is hanging in a prominent corner. 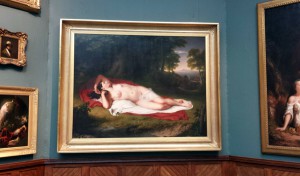 This is a painting by John Vanderlyn, depicting the mythological figure Ariadne. The full title of the picture is Ariadne Asleep on the Island of Naxos. It was completed in 1814, so this is its 200th anniversary year.

You may recognize the name Ariadne from its use in the move Inception. Ariadne is associated with the classic labyrinth story. In the myth, Ariadne fell in love with the hero Theseus, and helped him to escape from the minotaur’s labyrinth. This picture is supposed to depict the moment where, after eloping with Theseus, Ariadne woke up to find that the man she thought she loved had slipped out in the night and abandoned her.

You can click on the picture above to enlarge the painting, and there’s another image of this painting here in this long internet gallery of Ariadne paintings. She’s a fairly popular subject! She’s kind of a cool character because she was a problem-solver, but artists did seem interested in depicting this sad moment in her story.  In some versions of the story she’s then discovered by the God Dionysis, who falls in love with her and ends up marrying her. Being the wife of the goddess of wine doesn’t seem like a bad deal at all. I think it would be super chill to get a bottle of Merlot with Ariadne and talk about adventure games.

But the thing that really struck me about this piece is this.

An info screen in the gallery explained that when this painting was initially hung, it was controversial. Some concerned women wrote a letter to the gallery about some pictures that they found too offensive, the Ariadne among them. I took a picture of the info screen containing the text of the letter. 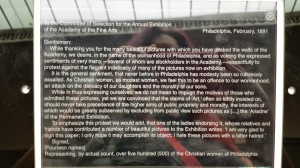 I think it’s legible when enlarged, even with my reflection on the glass. In case it isn’t for you, it reads:

Gentlemen:
While thanking you for the many beautiful pictures with which you have decked the walls of the Academy, we desire, in the name of the womanhood of Philadelphia, and as voicing the expressed sentiments of very many, — several of whom are stockholders in the Academy, — respectfully to protest against the flagrant indelicacy of many of the pictures now on exhibition.

It is the general sentiment, that never before in Philadelphia has modesty been so ruthlessly assailed. As Christian women, as modest women, we feel this to be an offence to our womanhood, an attack on the delicacy of our daughters and the morality of our sons.

While in thus expressing ourselves, we do not mean to impugn the motives of those who admitted these pictures, yet we are convinced that the claims of ‘Art,’ often so loftily insisted on, should never take precedence of the higher aims of public propriety and morality, the interests of which would be greatly subserved by excluding from public view such pictures as […] the ‘Ariadne’ of the Permanent Exhibition.

To emphasize this protest we would add, that one of the ladies endorsing it, whose relatives and friends have contributed a number of beautiful pictures to the Exhibition writes: ‘I am very glad to sign this paper; I only hope it may accomplish its object; I hate these pictures with a bitter hatred.’

[Fourteen names]
Representing, by actual count, over five hundred (500) of the Christian women of Philadelphia

I thought that this was incredibly interesting.