Grand Theft Auto V is coming out for PC.

Do you have kids? Above say… ten years old, or so.

I went to a middle school computer club last week and talked with a bunch of brilliant kids about how games are made. At the start of a school lecture, I like to show pictures from different games and ask if the kids play or know of those games. I start out really easy, and work my way to more obscure indie stuff. 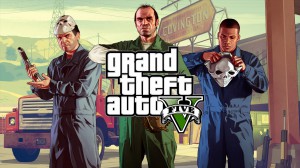 In this group, pretty much every kid plays Minecraft, and pretty much every kid at least recognizes GTA. They all claim to be playing that, too – it’s possible that they’re just doing this to look cool in front of other kids who are totally playing it, but, even at a conservative estimate, half of the average middle school classroom in this area is pretty aware of GTA. If they aren’t playing it at home, they may be looking up videos on YouTube or playing it at friends’ houses. Half of the kids I talked to in that class also claimed they were aware of PewDiePie, so they know how to look up YouTube videos on the internet about games they are curious about.

I admit I have a strange perspective, because I game heavily and I’m not a parent. That means that I know a lot about the content of various games compared to the average parent. I’m surprised when people seem surprised that you can have sex with prostitutes in GTA, and then kill them. Regardless of what you might think of that content, it exists, and that content has been in the game since at least GTA 3 in 2001. It was controversial then, too. I figured what the average person knew about Grand Theft Auto was more or less summed up as “you steal cars and run over hookers with the cars.” Maybe I’m wrong about what the average person thinks is in GTA. (The truth is, there’s just a lot of stuff in GTA. That is one of the things that is in it.)

I have a knee-jerk reaction when I hear “don’t let your kids see/read/play X.” Maybe it’s unfair because it’s coming from a “not a mom, just a hopefully-cool aunt” place. But I think the problem with this attitude is that when kids do get their hands on that media – and they do – they’re going to see it as a kind of forbidden fruit. They’re going to sneak it. That means that parents may not get the opportunity to watch the media with them, view their reactions, and explain what they are seeing. I was pretty lucky in that my parents were generally lenient about media growing up, so I got to see a lot of the cool movies and read the cool books and play cool games long before they were perhaps technically appropriate. Yes, my mom was sometimes concerned about content and yes, she did veto certain purchases. But overall, she was pretty chill about it. I was a kid in the era of DooM and Mortal Kombat and you gotta believe I played those games. Games are more realistic, visually, now than ever before, but that was the thing people were worried about then too, and this is still the thing people are still worried about now. In that sense, nothing has really changed. 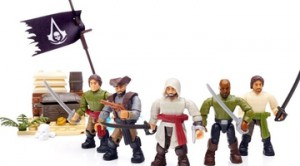 But one thing that has changed is that games are more prevalent than ever: a multi-billion dollar business. This doesn’t include just the games, but also licensing and merchandising of the games, which is definitely at an all-time high. That means that even though M-rated games aren’t supposed to be for kids, they’re often targeted at kids at least in some tie-in capacity. The game itself may not be for kids but the merchandising might be! Some examples: Call of Duty is an M-rated game, right? But there’s Call of Duty MegaBloks. Today, on Gamesindustry.biz, this article about Assassin’s Creed toys for kids. Here’s a Halo playset rated for kids 8 and up.

Now where it comes to Halo, I actually don’t think Halo is very M-rated compared to GTA. But it does say M on the box, mostly due to the human-on-alien violence. This is why it’s really important in my mind to actually check out the games that kids are playing and see what’s really in them. The ESA also offers a whole list of resources for parents to help out there.

A parent said to me last week, “You guys [Microsoft] should make a game like GTA, but for kids.” She was concerned about her kids playing GTA too and it’s reasonable for her to want a more friendly alternative that she’d feel safer about giving them. But there’s a lot tangled up in this problem. First of all, it takes hundreds of people many years to make a game the size of GTA, not to mention the cost involved: multiple hundreds of millions of dollars. But also, part of what makes GTA appealing to kids in the first place is the sense that it’s not really “for” them and they’re checking out something more grown-up and adult.

There are certainly alternatives. I prefer Saints Row to GTA these days, but it’s still really adult in its content and humor even if it’s more broad and cartoonish. There’s lots of games out there making money that are specifically for kids, like Disney Infinity, which I kind of want even as a grown-up. In fact, according to the ESA, 88 percent of games sold today are E-rated, and appropriate for everyone. But that doesn’t mean that the M-rated games kids see advertised on TV and in stores aren’t capturing their curiosity. So I feel that “just say no” is an approach likely to backfire.

It’s a sticky problem. But let me at least offer: if you’ve got kids, and questions about games, you can ask me. I’d like to teach more kids how to make their own games, too. Hit me up in the comments, on Twitter, or anywhere else I tend to be.

One thought on “M-Rated Games and Parents”