On Saturday, I went to BarCamp Philly. At this “Unconference,” I learned that the “Bar” in “BarCamp” comes from the phrase “Foo-Bar” rather than having to do with alcohol. That answered a big burning question of mine, let me tell you! I also delivered a talk about Gamification, wherein I tried out a new crowd game called Cat On Yer Head.

Join me below the fold for an explanation of the game, the game book, the talk, and talk acknowledgements!

The icebreaker game that we played during the talk is actually a newish game designed for crowds called Cat on Yer Head! It is an IndieCade 2014 selection. I learned Cat on Yer Head from a sample sent by the designer, Rob Davis. The game itself can be learned and used in your talks and classrooms by downloading the fully illustrated ebook from Playniac or getting a printed paperback version. The book actually has a bunch of variations on the game that involve some different “characters” and goals for the cat, mouse, and more. 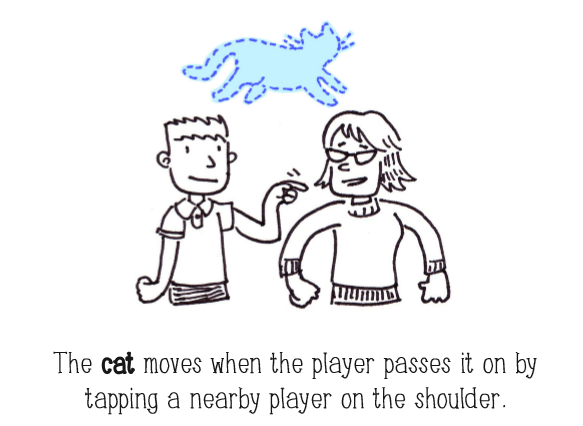 As you can see from above, the art is really charming in it too. I think it serves as a great opener for a big group and was a lot of fun to play with at the conference, so thanks everyone who participated in the game! I hope you had fun!

Now, if you weren’t present for my talk, or you were present, and you want to find out more about where I learned many things I know about this topic (other than first-hand game design practice and through many examples), I’m going to describe the talk primarily through a list of sources and resources I used to build it. I acknowledge these during the talk as well but I want to be sure they are listed on an easy-to-access place for posterity. Most of being smart about something is knowing where to find information about something. Here is that information.

I approach the concept of “Gamifying” with a healthy dose of up-front skepticism. For that, I linked to Ian Bogost’s Gamification Is Bullshit, an honest look at gamification as a bad, tacked-on strategy. On the more “pro” side, some illustrations that I sourced for the talk are from the book Gamification at Work: Designing Engaging Business Software by Janaki Kumar and Mario Herger. The chart they use about player type motivations is based on work from Richard Bartle, where you can find out more. 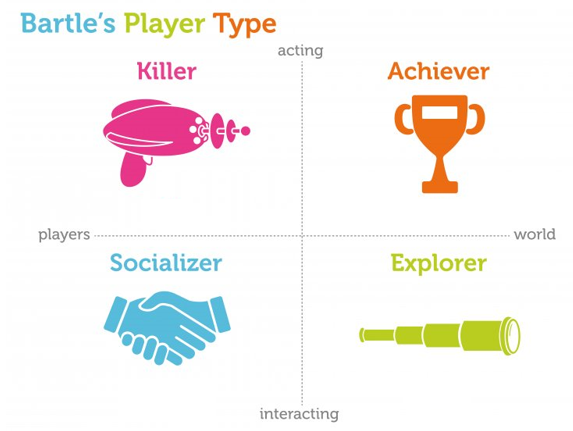 Before I saw the phrase in this book, it was Sheri Graner Ray that I first heard use the phrase “chocolate on broccoli” to describe bad educational gaming, and since that’s such a useful phrase to describe the phenomenon I owe her for inspiration to seek out more. I also learned so much about this topic from working with Jesse Schell at Schell Games where they are working on the amazing Lexica game! A new edition of his book, The Art of Game Design: a Book of Lenses is coming out in December.

The TED Talk that lists Seven Ways Video Games Engage the Brain by Tom Chatfield, is on YouTube. In my talk I also go into deeper about the concept of Flow, which was explained best in the book Flow: the Psychology of Optimal Experience by Mihaly Csikszentmihalyi. It’s referenced by game designers a lot. The chart I used was right from the Wikipedia page about flow, which is a good enough starting point for understanding. I also dropped in the phrase “lusory attitude” at one point, which is taken from one of the oldest game design books that I know, The Grasshopper: Games, Life, and Utopia by Bernard Suits. This discusses the concept in more detail, along with other philosophical points like what does it mean to “cheat” and what is a game, anyway?

And now you know where all the content I discussed comes from, more or less, minus my screenshots from Xbox Fitness and Destiny and The Ville, etc. Happy gamifying!

Thanks now also to Barcamp for a great event, great audience and talks I attended, the GEL Lab at MSU for getting me started on the “Serious Games” path, once again to Rob Davis for the Cat on Yer Head preview, and my middle school English teacher Mrs. Graeser for the most gamified classroom ever, that I wish every kid could have. (Apparently it’s still in the student handbook, so, yay!)