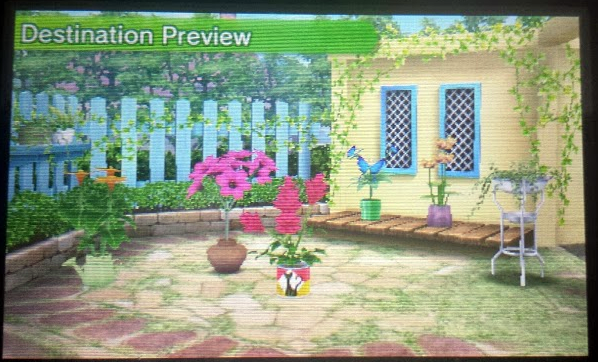 Picking up on my little reviews of all the games on Streetpass, which I started writing yesterday. This begins reviews of games that cost additional money, so not everyone will have them. So, are they worth the price?

I hate Mii Force. Well, okay, maybe that’s a bit harsh, but generally speaking, when I’m doing a Streetpass sweep, I skip it. I only play it as the last game of the day if I’m not picking up any more Streetpasses that day. 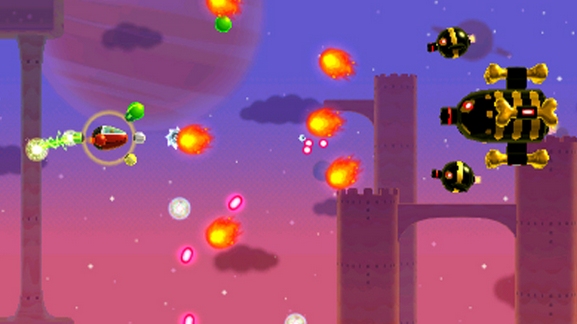 This game moves too fast for me to take my own screenshots, so here’s a clearer one I found on Giant Bomb.

Mii Force is a schmup. Your Mii flies a spaceship that shoots at other spaceships. It’s a pretty traditional game, and requires twitch reflexes, and that’s the big problem with it. It’s not exactly Ikaruga, but it’s difficult enough to require 100% of your focus to play, which is different from most of the other Streetpass games. Each person you encounter in Streetpass adds a weapon (type based on shirt color, like in Find Mii) and a “hit point” to your little space ship. Therefore, the more people you encounter, the better off you are in Mii Force. But in the situation where you’re likely to have had 10 Streetpasses, you generally can’t spare the attention it takes to play Mii Force.

In defense of Mii Force, it’s relatively short, and based around the idea of replaying levels in order to get a higher score or find more treasures. It has leaderboards, which count all the people who play Mii Force that you have encountered and are pretty useful to compare your level runs to those of others. The bossfights and stuff are also pretty imaginative. It can be fun to play, just not the best choice for this format at times.

Flower Town became my favorite of the 3DS Streetpass games. It’s dead simple: a game where you plant different flowers and arrange them in pretty ways in little digital gardens. The people you Streetpass come over to water your newest flower so you can grow more flowers. The game challenges you to grow as many different flower types as possible. You can optionally take on challenges to grow a specific flower or a flower with certain properties (a medicinal flower, a sweet-smelling flower, etc). The properties of each flower you’ve grown are noted in a guidebook that you can reference.

I’ve spent a lot of time arranging my little digital gardens. I have an elegant simple one with neutrally colored flowers, and a wacky one with flowers that look like birthday cakes and butterflies.

Just one of my little gardens. Be soothed.

The thing I dislike the most in Flower Town is that every time I boot it up, Mendel the Mentor Gardener reminds me how the game works again. (I get it already, Mendel. I’ve been at this for a while now.) The flower-watering animation is also a bit slow, but Streetpass has a fast-forward button on the right trigger to speed this kind of thing up. I use the fast-forward button a lot.

A strategy game, sort of, where you arrange little armies and make them fight each other in a paper-rock-scissors configuration. If you meet someone on the road who doesn’t own Warrior’s Way, everyone they’ve ever Streetpassed is added to your army. If you meet someone else who does own it, you can optionally challenge their army. Challenging their army is only practical if their army is smaller or near the same size as yours, since you will lose units if you lose. You gain units when you win. The object of the game is ostensibly to conquer the world, but the actual object of the game is simply to get as big an army as possible in order to fulfill that goal. Then you can challenge NPC armies on a board to take over little countries. 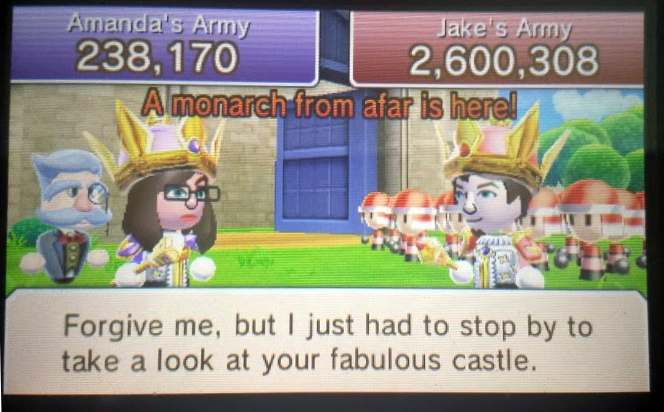 This is not a fight I want to pick.

I don’t hate Warrior’s Way, but after fighting the first couple of NPC armies, the amount of people needed to take on a new country increases rapidly. So Warrior’s Way is largely boring; lots of times I meet-and-greet new people, add them to my army, then end the session without doing anything. I need to add another hundred-thousand people before I can actually advance at this point. Hiring mercenaries with Play Coins will also add to the army I guess… but it feels like cheating somehow.

Warrior’s Way has a leaderboard that is completely useless. It only measures how many people are in your army, and compares that to others. In a heavy use case, I’ve already met enough people with maxed-out armies containing 9,999,999 soldiers that this is all the board consists of. I will never get on the leaderboard until I also have 9,999,999 soldiers, and then I suppose I jump straight to Number One. 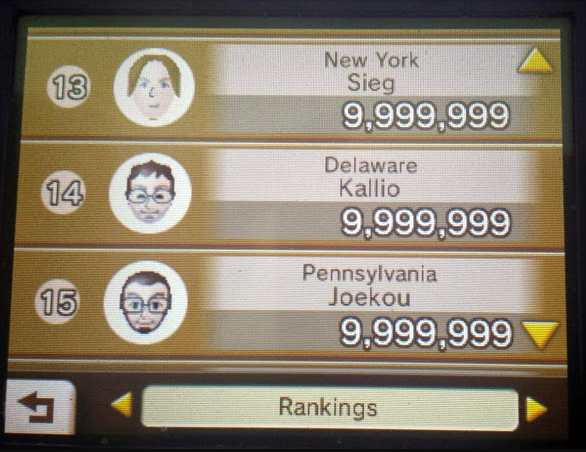 Thanks for nothing, Warrior’s Way.

I’m amused by the GamerCat comic that uses Warrior’s Way army size to showcase a girl’s gaming skill. When Girl Gamer Cat has a larger Warrior’s Way army, it really just means she gets out more. …Or she’s had the 3DS for longer, or goes to more game conventions or events, or other things that are in turn a good proxy for skill or at least gamer-cred so I guess the metaphor works after all.