Having just got back from GDC, I saw a little bit of That Reddit Post that’s going around. If you haven’t seen it yet, don’t worry about it, though I for one support colorful hair and hugging (As I said in so many words on Twitter – Hug a Dev – Ask First). Specifically, though, I want to address just part of the post that I found interesting, which was about the game technologies on display at GDC. 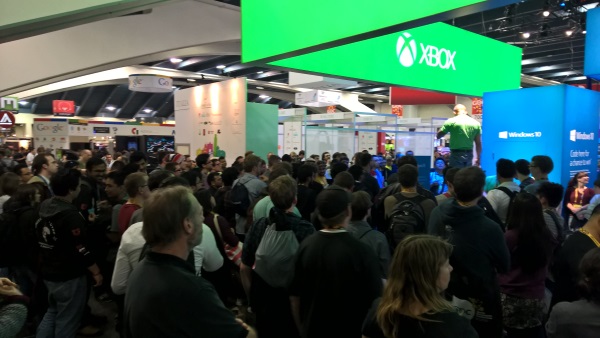 First of all, I noticed that this poster praised Torque, which I found odd. A few jobs ago it was the engine I was using, and everyone that I said that to expressed their sympathies. Nothing against the people working on that middleware, but it had a really difficult asset pipeline, especially for teaching to students. And it lacked flexibility; things that seemed like they should be easy, like moving platforms for a platforming game required hacking the base sourcecode. I still think we learned valuable skills working in Torque. But when I saw how simple the same tasks were comparatively in Unity, I was really happy to switch. Maybe that makes it easier for just anybody to make moving platforms, but there’s no point in emphasizing a higher barrier to entry for the same exact resulting game mechanic. (Please note that is is all just my personal tech opinions, but it’s something that I worked with for several years.)

At GDC I was part of the Quick Start Challenges for Microsoft’s booth, right on the expo floor, and people were allowed to check out whatever challenge they thought was most interesting. The premise: code up a coding challenge and enter a raffle to win great MS prizes. From my observations (and our post-event surveys) people were most interested in checking out our Unity challenge above all. Maybe it was because they were already familiar with the engine and thought it seemed easy. Or maybe it was because of the really amazing graphics in our sample game, Zombie Pumpkin Slayer (Source code and assets available on GitHub thanks to the amazing Adam Tuliper).

But there were some other challenges in the QSCs equally worth checking out. For one, we showcased the Xbox Live SDK for Windows 10, which will allow developers to use XBox Live Leaderboards, Friends Lists, etc, in their Windows 10 games. I’m really excited about this because it’s a feature people have been asking for, and that I’ve personally wanted too.

We also had a Cocos2d-x Challenge!  I don’t know if this is a surprise to the Reddit poster who seemed to imply it wasn’t around anymore, but Cocos2d is a platform MS is committing support to, and if you want to learn it, we’re here to help. I helped out with the live event for the Cocos2d-x tutorial on Microsoft Virtual Academy, which is lead by Eric Mittelete and Sanjeev Dwivedi. If you want to check out the challenge that people were able to do on the floor at GDC, it’s available on MVA as well.

Microsoft is posting a lot of free game development tutorials on Virtual Academy to get beginners started. There’s resources for WebGL, C++/Direct X, and MonoGame, as well as the “easier” middlewares like Construct 2, GameMaker, and of course Unity.

And here’s some other MVA’s Microsoft is encouraging people to check out right now:

Developing Universal Windows Apps with C# and XAML (The Universal App Platform is what Windows is moving toward in in the future – no separate codebase for your  PC and Phone versions!)

So… maybe you want to dive right into writing code. Or maybe you find that intimidating, and something more graphical is more your speed. Whatever it is, I’m happy to help point you in the right direction. Good luck to all the beginners, and experienced coders, and riffraff out there.