Lately I’ve taken an interest in Microsoft’s Cognitive Services suite, and given some talks about Cognitive Services around the country. Since it makes sense to take some notes on this process, I’m going to write a couple of blog entries going through some of the services available and some sample code for people who want to try it out. Before I start doing that, I’ll just write a brief intro about what Cognitive Services are and why they’re pretty cool.

Cognitive Services used to be called Microsoft Project Oxford. Since its debut it’s expanded to include more features. This is a suite of intelligent APIs that work cross-platform to provide intelligent data such as facial recognition in images, voice recognition of speakers, and video stabilization. There’s a variety of APIs to explore here. You can access the APIs from any kind of app that you want to interface with them, though I have been coding in C# the most lately so that’s what I’ll use in examples.

You might already be familiar with Cognitive Services already if you tried out the How-Old.Net website back in May of last year. (I recall this going viral, then a big scare about if Microsoft was saving your images and violating privacy, but… the site doesn’t save your images, so don’t worry if you want to play around with it.) There’s also another favorite, the Fetch app, which is at https://www.what-dog.net/. It can recognize breeds of dog, or tell you what dog it thinks you are… 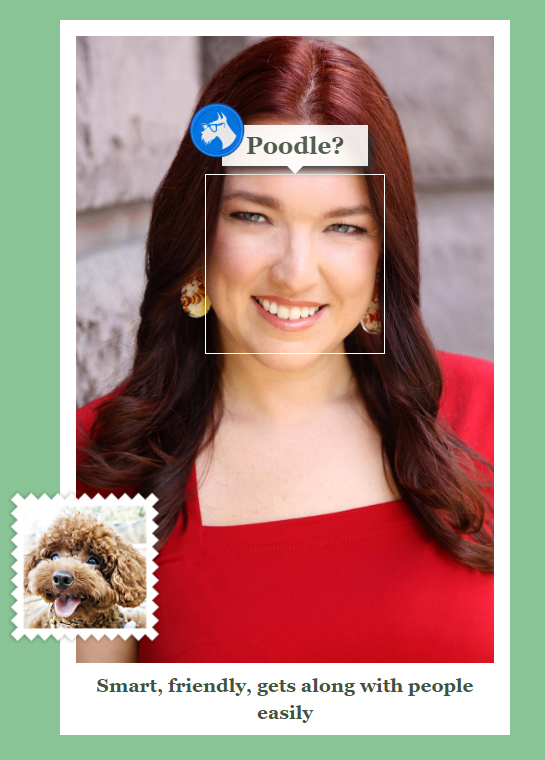 It thinks I’m a poodle.

You should check out all the APIs that are available and just play around. I particularly have fun with the Image Analysis. It’s pretty smart, though it’s not always a hundred percent right which is why it gives off a confidence rating whenever it analyzes a picture. What impresses me as well is it recognizes a pretty amazing variety of celebrities, including people from television and Broadway. Also, I will stealthily point out to you that it judges pictures on their Adult Content and Raciness Rating, which has lots of practical and impractical applications.

As an Interactive Fiction fan, I’m also really excited about the possibilities in the natural language understanding API. With my background, I think of it as a potential for a much better text parser for a conversational IF. I’m going to be approaching a new project from that angle.

If you want to do more than just play and use these in an app, you’ll need a Microsoft account to log in and get API keys. (It’s the “My Account” button in the top corner.) I’ll post step by step later, but if you can’t wait, you may also see me at Philly Code Camp this Saturday discussing them! Maybe see you this weekend!