A lot of buzz hit the internet this week about Flappy Bird, a recent mobile phone app to hit something resembling megahit status in just a few weeks. I’ve gotten some questions recently about what, in my opinion, can cause a mobile app to be a success. Let me preface by saying this is pure analysis, looking at the form factors in common with the mega hit apps on mobile phone. This isn’t me working from experience of developing a megahit, or I’d probably be a lot more humble and a lot less analytical. (Also, I’d be in the Bahamas.)

First, I want to define what I mean by “megahit.” Lots of apps are really successful, but in this case I’m talking about apps that are such big hits that they are unavoidable. They’re not just a game that a gamer is playing, but a game your neighbor is playing. Some examples of apps that have megahit status in my mind: Angry Birds, Tiny Tower, Draw Something, Flappy Bird, and Candy Crush Saga. A lot of people roll their eyes at some of these games, but their status as successes isn’t deniable.

So what factors do successful games have in common? From most, to somewhat lesser in importance:

If I were to actually draw a chart showing the actual level of importance here, Luck would be the biggest factor times ten times a hundred. If I were to devote words to how important Luck is, it would be the largest part of this article too. But luck is what it is, and it’s not a factor that any one person has much control over.

There’s really only one way to increase your luck, and that’s with the Iteration part.

If you were buying a ticket for a raffle (or, the lottery), you’d have a better chance of winning the raffle if you bought more than one ticket. Likewise, people who make megahit apps tend to make a lot of apps. Rovio Mobile had dozens of less-interesting games before hitting on Angry Birds. Flappy Bird‘s creator has several other titles. Draw Something may seem like it came out of nowhere, but it was a mobile iteration on Draw My Thing, a game from 2008 that was part of OMGPop’s huge library.

If your success does amount to a roll of the dice, you’re better off, statistically, rolling as many dice as you can. But iteration also adds another factor: the more games you make, the better you get at making games.

I’ve seen lots of people get great success with their first released indy game. But this seems less frequent in mobile, at least not without a proven track record of already developing hits for other platforms, or a pre-existing brand name backing the app. You’re just better off making a lot of games.

Polish is an interesting factor because Flappy Bird is a hit, but doesn’t seem like it’s polished in a traditional sense. In many ways it looks rather crude.

But it really isn’t, at least, not in the ways that are important, which is basic attractiveness and “readability.” The average person doesn’t really have a firm grasp of framerates or things that hardcore gamers debate a lot about. They just care if the game looks “finished” and appealing. There’s a lot of factors that go into readability and appeal: too many for this post. I want to talk later about color theory and why it’s really important for mobile apps. For now let me just say that Flappy Bird while it looks weird, does not look unpleasant, and that’s really important.

Yeah, a lot of people don’t like that the pipes are the same exact shape as the ones from Mario. I won’t go into whether or not they are plagiarized. But as a borrowed design, it’s one that at least is very readable and makes its boundaries very clear to the player. The hard-edged shape and bold outlines of the pipes mean that when you lose the game, you always feel that it’s in some way your fault.

Friendliess is a factor that’s closely related to polish. Generally speaking people are more likely to download apps that look like they’re, well, fun, and less likely to click on stuff that seems like it might be grim. People often associate grimmer aesthetics with the game being too hard or some kind of time sink.

Note that it doesn’t actually matter if the game is a hard time sink. Flappy Bird is really hard and is a time sink. Candy Crush Saga is hard, unfair, and a time sink. But neither of these games are oppressive in how they present this. In fact it’s totally OK to be cruel in your game design, and it seems like the combination of cute and cruel works especially well. But it is important the game appear approachable, and simple to understand controls are a big factor as well. Design with the touchscreen in mind, instead of a game that relies on floating joypads to operate, and the game will be better and more likely to be played.

I realize I really didn’t talk about creativity or originality at all. Sorry. It’s entirely possible to create a game that is very original and also a hit. It’s also possible to put a new layer of polish on mechanics that are already out there, re-theme it a little bit, and still have a tremendous hit…

Thoughts? Any obvious factors I’m missing? I know the fact that it’s more important to be iterative than creative doesn’t always thrill people, but it seems like the facts of life in mobile.

Our 7-Day Roguelike has a semi-perma home now.

If you came here, you should also read this great blog entry about the music for the game!

Wow! Our game is done!

Play it now on the web right here!

Or, you can download a standalone EXE. It’s in Flash. 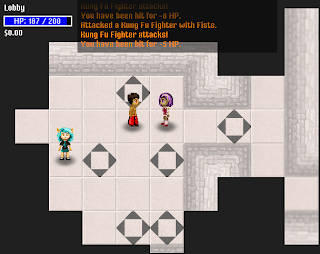 Anyway, I wasn’t crunching on this super late like Switchbreak and Leigh were so major thanks to both of you for working so hard to make a game! I’m really happy with it as is, even if I know we could probably work for weeks more and add a million more things…

I just drew a screen, but it’s for when you win, so you’ll probably never get to see it.

The game has 14 levels and 12 different enemy types. The challenge now is just to balance that out and find a place where the game is playable and fun, not too easy or hard. That’s always tricky though. 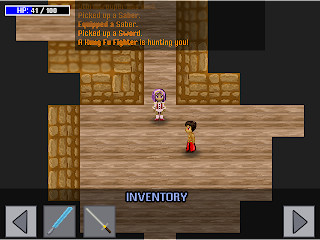 Thanks to Switchbreak’s tireless work, enemies now have real AI! And thanks to Leigh, there’s attack sounds for every player move! So cool!

The enemies now have real sprites. The animations are… eh, kinda lifeless, but I know I have a limited amount of time to knock out a pretty big variety of sprite sheets. So I’m happy with the graphical progress. Just a few days to go. 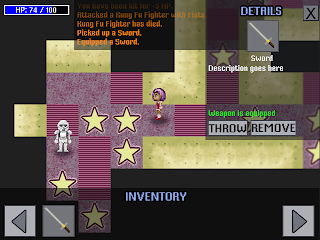 Excuse the dungeon tiles – they are in a bit of disarray at the moment. There’s going to be multiple different levels to the game so so far there’s five different dungeon styles.

I think we just made the pretty-hard decision to cut a lot of content in favor of getting this completed on time. So what I was thinking of being player classes will probably end up being enemies. That adds a much larger enemy variety, and allows us not to have to worry about balancing different PC classes and adding a selection screen. I’m okay with that, though. … DLC anyone?

Some better news is that we have sounds! Sorry, you can’t hear them in the screenshot. They’re being done by Leigh Dyer. A little bit of sound always adds a lot to a game…

This is starting to look like a game! Switchbreak has added items and inventory. The things you see circles for are things I need to make art for. 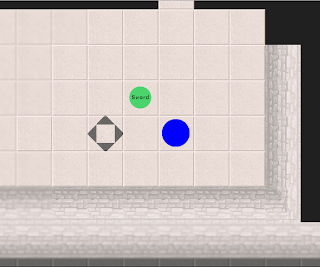 Here’s a few of my rough character sprites:

Edit: Starting to look like a real game now… Switchbreak is doing some amazing work at coding, so the game is already working well! There’s walls and floors and you can move around in them. It looks like this… 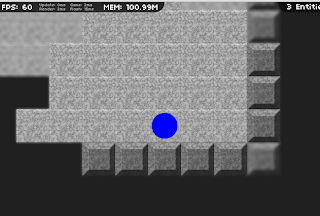 I’m meanwhile creating some different themed dungeon tiles, which look more like this: 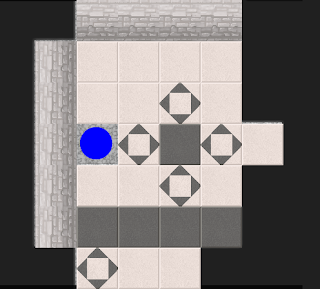 I’m actually going to tone the wall back a bit, since it’s supposed to start out like a clean hotel lobby. Future levels will be different rooms in the convention center. It will be labyrinthian like all convention centers.
Tweet

I’ve decided to try to participate in the 7-Day Roguelike challenge! I love roguelikes, and I’ve wanted to make one for a long time, so this seemed like a really good excuse. Switchbreak is doing the code! I’ll be coming up with design ideas and art. I’m excited to collaborate because I know that it will keep me on task.

Updates for the game will be archived here at Secondtruth.com during the challenge, much like I did for Fuck This Jam.
The working name for the game is Cosplay Mystery Dungeon. The idea behind the game is that it takes place at different levels of a geek/scifi convention. I’ve been to a lot of these, so by now I know the general tropes, and what kind of enemies you might end up fighting…
Stay tuned for more info!
Tweet

Dive is working again now, after my site outage yesterday.
I took the opportunity of the crash to update it based on a couple suggestions. The big one is that colors will now change depending on your location in the story. Thanks to Porpentine for helping me figure that out!