Now that I’m back and have essayed to death, I’ll post that my 3D model is moving along.  I had a setback, which is typical with a project such as this.  Specifically, I had put the skeleton in the model and gotten it “skinned” for animation, but that particular file has somehow gotten corrupted and won’t open anymore. 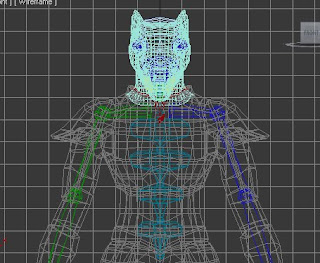 So I did it again. Fortunately I’ve gotten it down to the point where it doesn’t take me very long to line up a skeleton and skin. This is the “biped” in Studio Max, which I’ve found is a pretty easy way to skin a character. Once the skeleton is inside, you don’t move the character directly, just move the bones and the character moves with.   I figure most people understand this process but sometimes I lose touch with what people know and over-explain things. 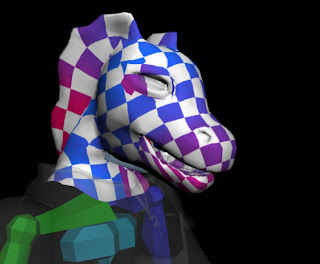 The checker pattern here indicates the presence of an “unwrap,” which I’m using the checkers to test for flat texturing.  I’m putting the character in to Z Brush and working on her to create a nicer texture, but I don’t have the latest version at home.  Hm, when will it be time to buy…?

The unwrap overall is good to go though I see a little stretch on the bottom jaw that I might tweak. I experimented with Unwrella, a product that allows for fast automatic unwrapping of a charcter.  I need to learn better how to work with it, but did have a problem with the plug-in about halfway through and did the head manually.  The body was unwrapped with the quicker Unwrella method and we’ll see how much I like working with it after I start painting the full texture.