I’m already on record as ARG-Skeptical.

However a fairly successful ARG seemed to be taking place over the course of the last couple of weeks, courtesy Valve and its “Potato Sack.”  When I initially became aware of the promotion, my only involvement was to buy the “sack,” which contained a suite of indie games at low low prices,because it contained games that I wanted and was going to buy anyway (in some cases, I already had them, so I have doubles. Anyone out there need an Audiosurf?).  I just wanted to take advantage of the deal before it disappeared, which is the damn thing about Steam.

Afterwards I became aware that there was an extra hook to it, though it wasn’t clear to me what someone “had” to do.  Internet paranoia set in.  By just buying the pack and figuring I’d fire some games up later, was I “doin it wrong”?  Was my lack of free time and concentration on Dragon Age (which I just bought, yeah, the first one, sometimes I’m slow), causing mass internet disappointment?

I researched.  A wiki sprang up about the ARG associated with the Potato Sack.  The only apparent point of the ARG was to get the game Portal 2 unlocked slightly early for PC purchasers (not a lot earlier, as it turns out).  A few lucky “test subjects” also got to play the game early with a surprise trip to Valve HQ.

The ARG consisted of additional puzzles and levels added to the games in the bundle, which must’ve taken a lot of effort from all the developers and been an undertaking for everyone.  It’s unclear (at least to me, so maybe someone can fill me in) what relationship exactly doing the bonus levels had to “unlocking” the game, except for the Chosen Few who got to go to Valve.  It may just be access to bragging rights, cool Achievements, and swag, though a few people also got free copies of the game for unlocking all the “potatoes” in time.  That being said, this is hard-core ARG puzzle solving… I can barely make any sense of, say, this, even though I did check out the “Justine” bonus content in Amnesia.  (That link may contain spoilers for Amnesia, by the way. Honestly I can’t even tell you.)  I do know that this is not an ARG strategy – it’s just hacking the game not to find the monster data to make the game easier.  ARG strategy pages make more sense if you watch them updated in realtime.  Looking at them as artifacts they become strange messes of data that are hard to process in one sitting.  The wiki is interesting from a pure outsider perspective in the sense that ARG “puppetmasters” also seem to be playing the game from within the wiki, aware of its existance, at one point writing cryptic messages within the wiki timeline itself. 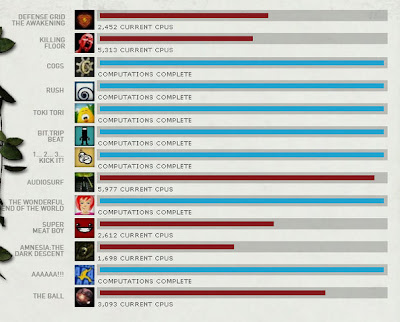 The core ARG group seemed to develop a strategy of playing the games one at a time.  At about 3 PM yesterday, while this was in full swing, I took this screenshot of the “games completed” as per the calculations.

My initial take on seeing this screen was that it looked a like a normal play pattern.  I haven’t played everything in the Sack yet, but the games that completed first all seem to be fun, breezy light games that the average person would be likely to fire up first out of the set.  The omission of Audiosurf from that list, which is fairly breezy itself, only makes sense in the context of it having been out for a while, so a lot of people probably already had it as compared to, say, Kick It.

Actually, however, there was a core group of ARG-faithful playing the games deliberately. Someone in the hive mind got the idea that it was smartest to concentrate the entire group on one game at a time.  (I’m not sure if that was actually the optimal strategy or not, but that seemed to be the strategy, and an ARG hive mind is generally good at optimizing strategy so I’ll go with them there.)  They also got the idea to, again, for whatever reason, concentrate on the breeziest games first, at least it seems.  The hive mind would move on to another concentration when its favored game was “close enough,” to avoid duplication of game-playing effort (if you see game playing as effort).  In the screenshot above, I’m not sure what the hivemind is orienting around, though I did watch a sharp turn toward Killing Floor later that night.

That did create an interesting dilemma for me once I figured it out.  Should I play whatever game I want to, because playing games is fun, or, should I play a “productive” game to help out the hive? In the end I played a bit of Super Meat Boy as it was both “productive” and fun. (The games that I would be initially drawn to in the first place are different from the games that would draw the average person, so it was a non-dilemma in the end.)

What I’d love to know is how the hivemind decided which game to focus on, if there was even a strategy there at all.  If the goal was to fill as many game progress bars as possible, is it better to concentrate on the “breezy” games first to get them filled more quickly, or is it better to concentrate on the games that people will not play on their own? If I were running the hive, I would’ve done it backwards from how they picked their strategy.  Amnesia (which is a fantastic game) was the last game to fill (though by a narrow margin to Defense Grid).  If this was an ordinary play pattern, that’s what I would have expected anyway, because the majority of people don’t like games that are extremely scary.  However, the ARG community probably has the guts to run Amnesia, so they should’ve done it first, while regular uninvolved people played more lighthearted games unawares.  Super Meat Boy, while lighthearted, is really challenging, so it makes sense that people would shy away from that one on their own as well.

So… how successful was this ARG?

I don’t have any numbers from Valve obviously. Maybe they will appear over the next couple of days.  But, like most ARGs, this was an advertisement, and, as an advertisement, it seemed to be fairly successful. It displayed a clear call to action that is unusual for most ARGs.  Rather than “buy our game, after our advertising ARG is over,” which is how most of these things work, the rules for the Potato Sack were “buy these games, if you want to play in this meta-game.”  That had to translate to some wins for Steam and for the developers involved in the bundle, since anyone who wanted to play in the ARG had to spend money up front.  As for Portal sales, it may be fairly likely that anyone who was going to play in this ARG would’ve bought Portal 2 anyway, but it can’t hurt to generate a little more buzz around it, and maybe a few people might’ve been tipped over to buying it on PC because of this promotion.

From a player perspective this was actually stupidly unsucessful at least by one key metric. Namely: it was really quite hard to unlock Portal 2 all that early by the rules in play, and for all the combined effort of possibly thousands of people, they only got the game a couple of hours early.  I’m sure a few people noticed that, but, really being able to unlock the main game was just sort of a consolation prize; the fun of the thing was in the effort the players spent to unlock it in the first place, playing different games and solving puzzles.  I’ve never been one for a midnight release and I can just as soon wait until tomorrow to pull open the seal on a fresh game (see my above note re: Dragon Age).  But even if I don’t get around to Portal 2 this week or next, the metagame is going to roll around in my head for a while.

(…edited to add… wait a second, maybe this game wasn’t fun for some people participating seriously.  Okay, I’m willing to believe then that playing a game I thought was fun was definitely doing it right after all.)

2 thoughts on “On the Success of Valve’s “Potato” ARG”