The Portal games, of which there are now two, have a mysterious and silent female protagonist.

I like her.  Even though we don’t know much about her. 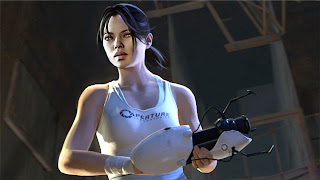 I should spoiler-cut the rest of this for politeness’ sake. It spoils everything.

So here’s what we don’t know about Chell.

Lab Rat, the comic written to link the new game, Portal 2, with its predecessor, states her name only as “Chell [redacted].” GLaDOS seems to imply she knows her surname in in-game dialog, but it’s never directly mentioned. Chell is probably short for Michelle, but we can’t say for sure.

Who Her Parents Are

This isn’t necessarily important in the case of a game protagonist. I can think of a lot of game characters whose parents I don’t know much about.  However, Portal 2 makes this detail important by bringing it up.  GLaDOS, in Chapter 3, tells you she’s going to introduce you to your parents, then, admits just after that she made this all up.  She tells you that you are adopted – jokingly, at first, but then admits later when she’s being more honest that this was in fact true.  The second time she mentions this, there’s less reason not to believe her.

There’s a fan theory floating around out there that one or more of Chell’s biological or adopted parents are Aperture CEO Cave Johnson and/or his assistant Caroline (the mental template for GLaDOS).  However, there’s no strong in-game evidence to support this, so I’m not sure I buy in to it. 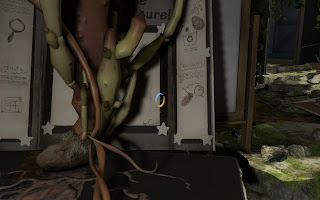 What we do know is that Chell’s father worked for Aperture at one time, because she was brought in at “Bring Your Daughter To Work Day,” when she was a child.  Her science project was the most amazing of all because she used “Daddy’s chemicals.”  (Enlarge picture to see this more clearly.)

How Old She Is

No way to tell.  The ‘99999’ days she spends in suspension (within the game’s audio) do not seem to be literal. They seem to be a buffer overflow of some kind.  “Take Your Daughter to Work Day” seemed to happen in the 90’s at some point, so, if we don’t count cryosleep, Chell is somewhere between 20-30 years old during the events of the Portal games, by a general reckoning. The really tricky thing is trying to figure out how long she was out; there is no concrete evidence.

Why She Came Back

In the first Portal, GLaDOS mentions that Chell is “not even a full-time employee.”  The way it’s stated makes it seem as if she is, however, a part-time employee. She may just be a test subject only, or she may have another duty at Aperture we don’t know about. Lab Rat indicates that she volunteered for testing at least, and had very little to say about it.

Since Chell’s parentage seems to be somewhat important to the story somehow, a logical theory is that her father was killed working at Aperture, possibly during the “Bring Your Daughter To Work Day” incident, and she returned and volunteered herself deliberately seeking revenge.  A female character getting revenge for her father is a bit of a cliche, but it does fit what we know, and, we know it was her father who worked at Aperture for sure (even if her mother may have, also).

…Why I Give a Damn About What I Don’t Know

Because, while I trust Valve, Chell is a silent female protagonist. From what we do know of her actual traits, which isn’t too much, she was almost rejected for testing not because she had some special powers or because of her parentage but because she possesses one of my all-time favorite heroine traits: indomitable will and tenacity.

I want to leave that right where it is. I almost want to preserve it in a cryosleep of its very own.  Knowing what I know now about what I thought I wanted to know about Samus Aran, I don’t think I want to know any more about Chell.  Gaps exist sometimes in narrative so we can fill them with speculation, or with ourselves.

I think I’m not the only person playing games in this era to hold some nostalgia for the past for one special reason: the lower fidelity of older games often invited us to provide our own stories, our own ideas for how things really were in those worlds.  I wouldn’t trade back the advancements technology has made, but sometimes it’s nice to be able to fill in some of the gaps.  Thanks to the Portal games for keeping a bit of mystery ‘still alive’.  At least, for now.

2 thoughts on “What We Don’t Know About Chell”