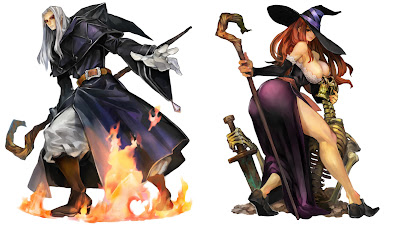 Except that’s a lie; the truth is I love the character designs in Dragon’s Crown. If I lived in a giant bubble, that would be the end of it. I’d just buy the game and giggle all the way down.
But the internet is the internet, and it feels like I’m not supposed to love this, because I am a feminist and I am A Very Bad Feminist if I support artwork like, well… that Sorceress there on the right. Her, specifically. With the boobs-n-butt pose and the long suggestive stick and dear god, those breasts, they’re like great heavy teats. I ought to be raging about this. Except I think she’s fabulous.
I put the male wizard here for contrast, by the way, because isn’t he also fabulous? Hey, the results are in, and some ladies really dig broody, Raistlin-type goth dudes. I bet he has such the tragic backstory.
What I find most interesting about the reaction to Sorceress is that it’s not just women who are uncomfortable (though I don’t deny that some women might be uncomfortable). A lot of men are uncomfortable. It’s a similar reaction, I think, to the new Cortana design (which I loved) or Bayonetta (who I also love).
The common denominator in all of those designs isn’t just that they’re sexy designs. It’s that they’re very deliberately highlighting something about what it means to sexualize a character. In the case of Cortana, her nakedness was supposed to make the player uncomfortable. For some, this went over their head and they just leered at her. For some players this actually worked, but they didn’t seem to understand why, so there was just backlash. In the case of Bayonetta, she’s using highly aggressive sexuality as a weapon. This is a trope as old as time (seriously, it’s Hero’s Journey stuff), to the point where lots of geeks take it for granted. (“Why the hell would they build female Decepticons” I once asked, “To distract enemy warriors obviously” Oh, obviously) But when you see it writ large, completely over the top, it’s not so much that now, now, this is a problem, as “is this how things have been all along?”
I get that this is pretty hard for the game industry. Lots of games in this era want to engage us on the topics of how most games are immature about handling sex and violence. So, in the case of violence, what kind of commentary do we end up with? Spec Ops: the Line, Hotline Miami, games that indulge in violence while they’re saying something about violence. In the case of sexuality and objectification of women, we get Bayonetta; we get Lollipop Chainsaw, games indulging in objectification in order to say something about objectification. The message gets mixed up if you’re doing a thing while you’re subtly condemning doing that thing. I’m not sure about this, but maybe that’s really the only way games can comment on things, and it either hits or it misses. Maybe we can do better; I don’t know.
But I think Dragon’s Crown is the wrong target. The anger at Dragon’s Crown is misplaced. Those boobs are supposed to look silly and maybe a little painful. They behave in a cartoony-floppy way that’s a long way from the anti-gravity boobs in, say, SoulCalibur, and that’s a good thing to me because it kind of highlights the ridiculousness of it all.
Lots of people point to, for example, Alyx in Half-Life as an example of how a female character in games ought to be. But Alyx never clicked with me that much. She’s fine; I have nothing against her, but I don’t gravitate to her in any way. On the other hand, I like Sorceress a lot. This isn’t saying “so put more crazy women like this in games.” This is saying, “hey, put more women in games, period, with a variety of designs doing a variety of things.” Not everyone’s tastes are going to be the same. If there’s only one female character in a game, she has the burden of representing all women, and that’s kind of a problem. But if there’s three or four of them, we’ve got options.
Maybe you can even have a chubby heroine in a game some day. I mean, I’m dreaming, right?
I am at least relieved that I’m not the only woman who likes Dragon’s Crown Sorceress – in fact, there’s already cosplay. You go, girls!
I’m not trying to say, if the designs make you uncomfortable, that you don’t have the right to feel uncomfortable. But if Sorceress makes you uncomfortable (and this is a question for the men) it might be interesting to ask yourself why you’re uncomfortable. Was this design surprisingly worse than many others, or was it just “the last straw”?
(ETA: I had to edit away an image on this because someone was leeching it, apologies.)
Tweet

8 thoughts on “That Gorgeous Sorceress”