This post is part of a 3 week series giving current and aspiring game devs the tools, resources, and advice they need to get started building for Windows. Check out the overview of the series to find what you need. For additional resources to build your app check out Appbuilder.

Now that I have a Windows 8 machine and tablet, I thought I would take full advantage of the Windows 8 features and port a game directly to Win 8. I already had a game – Faires Vs. Scaries – made in GameMaker a few years ago in a jam environment. This is my documentation of that process for anyone who might be interested in doing the same with a GameMaker game of their own. 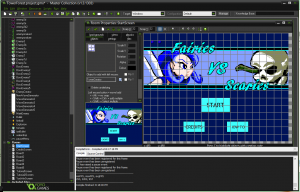 FVS is a pretty simple game from a graphical standpoint. It uses all native GameMaker graphics done in GameMaker’s graphic editor. That means it has kind of a primitive, retro vibe, but that’s the kind of thing that works well in the limits of a game jam environment. That also means however that it had to be sized up a little bit to work in Windows 8. For now, I set the game to always run in FullScreen. There’s also some useful code you can put on a Step event if you want to resize your games for devices.  The minimum resolution for Windows 8 apps is 1024 x 768 if you want to target Windows 8 from the beginning. I used these solutions to get it running temporarily, but I am going to go back in and size graphics up a bit larger now that I’ve seen the initial results.

Windows 8 requires touch controls, but this wasn’t a problem for FVS. The mouse controls that are already in the game can be used, and the entire game plays very easily on a touch only setup. So far so good! 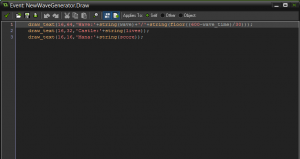 One change I discovered I did have to make was that I was using an obsolete method to draw the information in the game HUD. I modified the HUD by using all code to draw it, keeping things fairly simple. This new, quick HUD code always displays in the top left corner of the game. It shows the life bar of the castle and the amount of mana available to create towers (called “score” in the GameMaker code).

After doing some quick tests with the new HUD, I wanted to be sure I was working with the features that Windows 8 provides. So I also added some code to display the app bar. Here’s a basic example of active bar code.

Windows 8 has a variety of icons that will automatically appear if you choose the right name in your code. The complete list of icons you can choose from is available in the Windows Library. Also, for a good tutorial showing how to add some additional Windows 8 features, check out this blog by fellow MS guru Daniel Egan.

Time to export the game. This is the part that you might find tricky if it’s your first time. I opted to do a Windows 8.1 JavaScript export. Windows 8 native is also an option in GameMaker Pro.

See the button that says “acquire developer license”? All I had to do was hit that. After that GameMaker automatically got a license for the game so that it would work.

And then I can hit compile and see the game running on Windows 8! 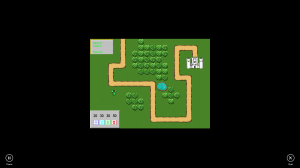 Some more porting tutorials that might help you if you want to try are on the YoYo Games Wiki, and include how to port your game and the unique platform features for Windows 8. I hope this has been useful for anyone who wants to try exporting a completed game in the latest version of GameMaker.

5 thoughts on “Porting My GameMaker App to Windows 8”