I’ve been working on a new game project that I want to show a few shots of. I was originally going to do this game for the PDJam, or Public Domain Game Jam, but I completely ran out of time in the weekend. So I tabled it, but I’m hoping to release it anyway sometime this month with better polish and some Windows Phone integrated features.

I’m calling this game Sun Run for right now, but that’s just a working title in the Unity project and I’ll probably change it to something a little bit zippier later. It’s based on the Greek myth of the chariot of the sun. Maybe you know the story: the sun is actually a chariot driven by spirited horses, which carry it across the sky every day. Once the god of the sun, Helios, had a son, named Phaethon, with a mortal woman, and this half-god young man decided he’d like to drive the chariot too. Helios said only a full god would be strong enough, but he finally relented and decided to give the boy a shot. Phaethon failed spectacularly, so now you can experience that spectacular failure, in game form! It’s highbrow, but it’s also wacky.

At the heart of the idea is a pretty basic hybrid endless runner/schmup setup with the extra monkey wrench of ropy chariot physics, and an aesthetic based on Greek urns. I chose this look because it’s simple to execute but looks unique and cool. Here’s a work in progress shot: 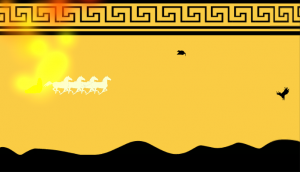 Pretty basic, but I’m going to fill it out over time. I hope the particle effects can stay, but I’m debating how much they harm visibility and performance so it’s a tradeoff.

A few things I’m doing with this game that are new to me:

Check back soon and I’ll walk you through the process of how I create my sprites, and some resources that are helping me with this project!