I had always seen 3D printers from afar, as some kind of miracle device that could just effortlessly make stuff. The hype online about 3D printing was incredible. But when I talked to anyone who had used a 3D Printer, they quickly warned me that the devices aren’t really magic. In fact, it actually takes some practice to get a 3D Printer to behave, and nothing turns out great at first.

I think the world should know.

This post exists primarily to catalog my series of failures in 3D Printing. Hopefully you’ll find that educational, and appreciate an honest look, along with my tips.

First of all: how to get started. The hardest part really is getting close to a 3D printer. I’m using a MakerBot Replicator, which is located at my place of work. You might be able to get close to one at a local hacker or maker space. I would not recommend running out and buying one until you’ve tried it somewhere and know that you’re going to be serious about using it.

You may have to provide your own filament. That’s the stuff that feeds into the nozzle of the device to print. (Think of the 3D Printer as kind of like a big hot glue gun, and you’ll understand how it prints the object. It melts a little strand of plastic super-fast then arranges it in the desired shape.) The place I had recommended to me to get filament was this site: Filament Direct.

The MakerBot software is a free download on MakerBot’s site. Downloading and installing the MakerBot software was an easy step. From there, there are a lot of different shape files (Makerbot calls them “things”) files that MakerBot comes with to get practice. I found that the files that came with MakerBot more or less always worked well. 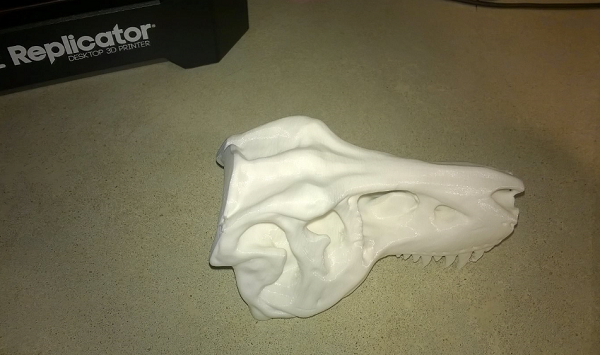 MakerBot has a community called Thingiverse that allows people to share their own models and how they turned out. One thing you might notice right away is that the 3D Printer is best for… knick-knacks, mostly. Some people do like to create plastic machined parts for more complicated IoT builds. But most 3D printed objects fall into the category of “a weird thing that sits on your desk.” The nice thing about the community is you can see how other prints turned out, before trying a file for yourself.

My dream application for the 3D Printer was to be able to create some small custom Dungeons & Dragons figurines. Think of how useful it would be to be able to create a bespoke army of little plastic orcs! And I’d love my own Dread Gazebo. But a possible hitch here is that the MakerBot doesn’t seem to do extremely well with small details on items, so the little details common to my favorite pewter models will be lost in translation.

Another tip: don’t underestimate the time it will take to make something. A small demo object takes about 20 minutes.  Most full-size useful things will take a couple of hours, or even overnight. And it’s entirely possible that a four-hour print will mess up and abort within the last twenty minutes of the process, forcing you to start again from the beginning. 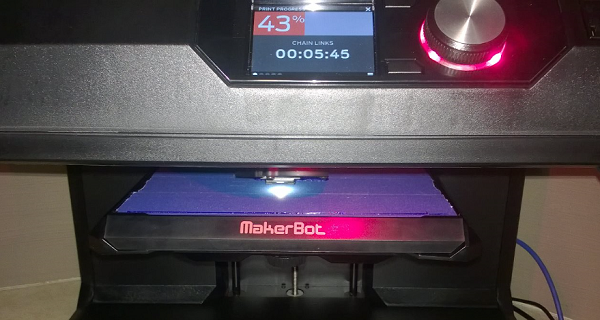 Now, to my process (and failures). I used 3D Studio Max to take models that I already had, and convert them into an .obj file (very versatile format) that I then imported directly into MakerBot desktop. I did a little tweaking inside the MakerBot program to make them printable, mostly just resizing and rotating to fit on the platform.

Then… nothing really worked all that great. The first time I tried printing, I kept getting errors that the filament was jammed. It reminded me of the old “paper jam” error from all the worst old printers. I finally got it to cooperate, but check this out: 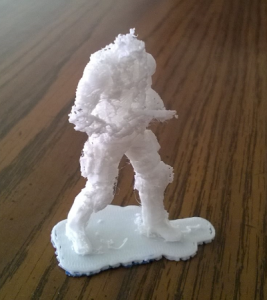 That headless toy solider is actually Chris Redfield from Resident Evil 5! I pulled him out of my eclectic personal collection of ripped game assets. It starts out looking good at the feet, but halfway up the body the print starts to fail in odd ways, making his arms look a bit… spiderwebby. Around the head as you can see the printer totally jammed and stopped printing altogether. It was still making noises like it was printing, but nothing was coming out.

I can’t absorb all the blame for the printer error here, but I think if I were to try this model again, I’d scale it up a bit more. It has a lot of detail that is just too hard to capture at toy soldier size. The hair in particular might have been a problem and I would probably resculpt it to something simpler to reprint.

Here is a simple 3D model that I made myself. I used to use this chubby rabbit model in a 3D unwrapping demo. 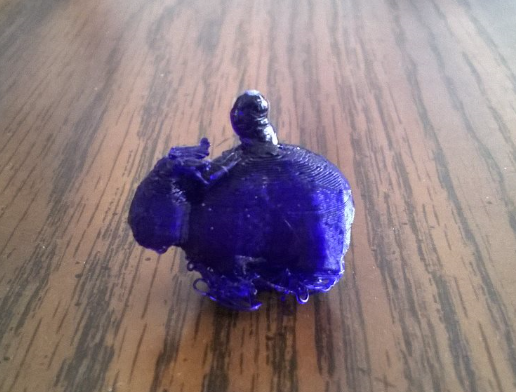 It doesn’t look much like a rabbit. That’s because while the printer was creating it, it stuck to the printer nozzle, which picked the “rabbit” up and moved it to a different location, then set it back down. The rabbit’s ears ended up molded into one weird lump on its back instead.

Lesson learned here: when creating your initial MakerBot model, don’t forget to turn the “raft” option on. That will create a stable base to make sure your model sticks to the plate while it’s being created. In this case, the problem was mainly that the little legs weren’t entirely flush with the ground, so the point of contact for the model with the plate was too small, causing it to shift during printing.

This is another pulled game asset, a dropship from Mass Effect 2. 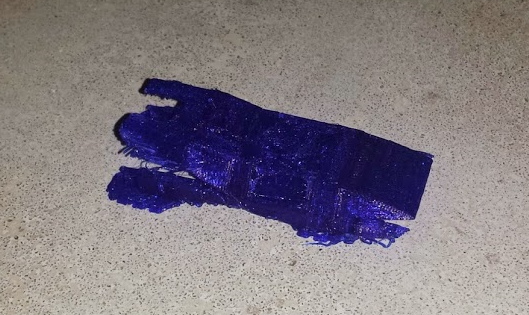 It actually turned out okay this time! But while I was pulling it off the raft, one of the little thrusters snapped off. If I wanted to keep this model, I’d have to print it again, being more delicate while I pulled it off the plate. There’s also a lot of “hairiness” to the bottom, which is basically just the printer’s fault. Though I could carefully clean it off or file it, it might also help to scale the ship up a bit too and print it again.

3D Printing is at least easier than say, glassblowing. But it’s a craft and it does take a little trial and error to get a unique piece designed that you are going to love. Working with MakerBot for the first time actually reminds me a lot of the old days of getting started rendering computer particle effects. Sometimes it would take all night to process a single simulation, which was ruined in the last thirty frames by some jerk kicking out the power strip. If 3D Printing progresses as quickly in technology as 3D animation does, though, it’s bound to be incredible some day. I’m going to keep at it and post more results later!