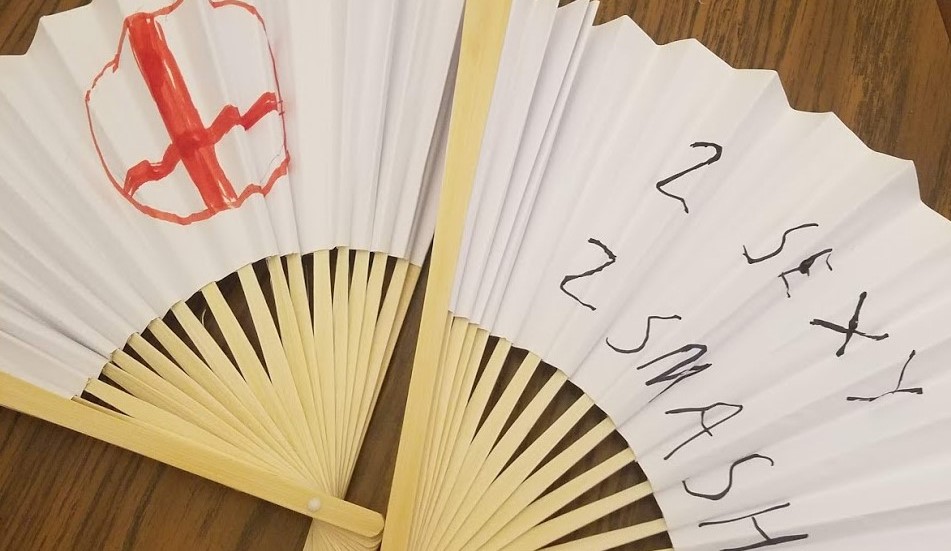 On the internet the posts that get boosted a lot are the best of the best people who look exactly like the character and have perfect bodies. Or, they’re the most prolific people who are excellent at self-promotion and perhaps are cosplaying as a second or even primary career. Also, you’ll probably catch wind that people on the internet were racist or harassing to cosplayers of color or plus-size cosplayers. And these things are likely to discourage you and make you feel as if you will never live up to these expectations.

Well, it’s hard sometimes for me to remember this too, but the internet is not real life. It’s more like life run through a sieve and double-distilled for potency and intense flavor. So, even when I get real discouraged that my cosplays may not be picked up on the internet, at the actual event where I’m cosplaying, people usually are really kind, really nice, and really happy to see cosplays. You’ll discover lots of friendships through the process of crafting your costume, and the people around you and their energy in the space is going to support you. So, please don’t worry about making things as perfect as what you see on the internet, or that someone on the internet is going to give you crap for getting some small detail wrong.

Along those lines, it’s perfectly okay to buy whatever part of your cosplay that you want. Personally I feel a great deal of pride from putting together a dress on scratch from my own. And I know that if I sew the cosplay myself, it’s going to fit, which is a problem I can run into with “off the rack” costumes on my body. So there are definitely some good things about crafting your own! But I use a combination of purchased and home-sewn cosplays. It’s a lot of work to do everything from scratch!

Some people aren’t sure what character to cosplay, and the pat advice is “whatever character you want!” But honestly, based on my personal experience, I’d say, “whatever you want that meshes well with the venue you’re going to.”

Some people are brave enough to just do a cosplay, and if no one else loves it or even “gets” it, they don’t mind. But I’m not that person. I really need to see some positive feedback surrounding me and to that effect I have determined it really matters where you wear what you wear. I think if people around you like your cosplay and react positively to it, it will help with the jitters you might otherwise feel, because you’re making people happy.

As an example. I did an Android 21 (from Dragon Ball FighterZ), which I thought looked hot. But the first place I wore it was PAX, and I didn’t get a lot of feedback. PAX doesn’t seem to have a lot of fighting game representation. I wore this cosplay again to MomoCon in Atlanta, and people were really happy to see it.

Similarly, doing classic Final Fantasy/FFXIV for the Ren Faire was perfect. Just enough people got it that it was a delight to them, and even the people that didn’t get it saw we were mages and fit in with the general vibe of the place.

One thing that helped me at MomoCon was seeing that there was an organized Dragon Ball photo shoot. I knew that way if I wore a DBZ outfit, I’d see a lot of other DBZ fans at the event. So it may be worthwhile, before going to a con, to see if there’s any fan-organized photoshoots for any fandoms you like, and if you can get in on those. Not only are people sure to recognize your costume that way, but you’ll also make some new friends! Some surprising and even obscure fandoms are represented at cons.

Maybe you’re better at walking around in high heels all day than I am. Some people are great at heels. I’m not one of them. After about 3 hours in Android 21 on a con floor in stilettos, I thought I might literally pass out. So, I started carrying flats as a backup.

Can I walk around in these shoes all day? Can I go to the bathroom in this? Will this costume allow me to wear proper underwear and support garments? These are the questions I ask now, after lots of costumes where the answer was “no.” You just have to look after yourself and consider what you can and can’t do. There’s no shame to altering a costume for comfort. For example, a dress may “canoninicaly” be backless, but I want to wear a regular bra, so I’ll make that alteration to have the dress cover the bra.

I don’t really know how to make my own props (see below for stuff I’m still learning). But any kind of in-character prop helps sell the character and helps with photo posing. Just be careful about carrying it. I still have to work on the problem where I carry around too much stuff. Along those lines:

6. Have some way to carry your mundane stuff

You’re always going to need some way to carry a few mundane objects with your cosplay. A hotel key, a credit card, your ID, cash, maybe your con badge, maybe a tampon or two (hey, it happens, let’s be real). So, I learned this tip in a cosplay panel, but I didn’t really internalize it until I tried myself going without: if your character has no way to carry stuff natively, you have to come up with some way.

It’s super nice if your cosplay has some pockets or pouches that are in-character. For White Mage, I made a belt pouch, and just having that filled me with joy every second. It was such an easy, hands-free way to carry my stuff at the faire and left my hands open for a drink or two. Ya’ll tease Rob Liefeld, but he was onto something there.

For my Mai at MAGfest, I made a matching handbag with the same fabric as the dress that tucked under my arm and blended into the trim on the costume. And I also hid a secret pocket in the sash that helped keep my con badge secure. You want these carrying pockets to be sturdy enough to actually carry what they need to carry! Early attempts I had to make bags weren’t really strong enough, so now I make fully lined bags and pockets.

I just started pushing the makeup in my costumes and this is a skill I’m going to actively work on this year. I think it makes a big difference in how much I look like the character, even a character that doesn’t seem as if they’re wearing much makeup.

On the other hand, if looking exactly right is not your concern, don’t worry about it, see point #1.

In the past, someone might take my picture at a con, but then I’d have no idea what happened to that picture! Now I am putting a picture of my cosplay on a card along with social media, so that they can tag me and I can see the picture. Not everyone posts the pictures they take of me, and not everyone ends up with a card, but even an additional tag or two helps me see how the cosplay looked to others and what people liked about it.

I took a burlesque class last year to learn more about good body language. Though I’m not sure it will be a full time thing, one thing I learned there was that there’s a weird intersection between being sexy and being silly. So I was going to call this, rule “If you can’t be sexy, be funny.” Because I decided that, okay, I’ll never be the hottest, skinniest chick on the floor, but I can make my cosplay into a meme and do lots of funny poses, and I’ll still win people over that way.  So for MAGfest, the reason I did Mai was the fans that I showed in the header image… not only was it a fun character to embody, but I could make jokes about how she wasn’t included in Smash Bros., and that made people laugh when they got the joke, and that made me laugh too!

But then I realized this rule can apply in other ways. More universally: if you can’t be accurate  – because of time, money, body type, or just the general impossibility of crafting the object you envision – be creative. Find some way to put a fun spin on the costume that only you could do, or make changes that show your creativity.

So these are all my tips for beginners as someone who is … relatively, a beginner, but made enough mistakes to learn what beginners need to learn. I hope that you find them valuable if you’re just getting started. Now I’m going to talk about some things I still need help with, so I know I still have a ways to go.

Things I still need to work on:

1. Making my own props

Props and armor! Foam and glue! I don’t know how to do them yet, but they really do make a difference… I did a closet Femme-Dante at MAGFest and I was comfy and it looked great IMO, but I felt naked without a sword/guns. I tried to buy a good replica at some point, but I couldn’t figure out how to get it shipped. It might be fun to craft it myself?

Lol hairstyling. Not my strong suit. I’ve been buying pre-styled wigs so far and they don’t always survive very long. The wig was the weak point in the Mai cosplay and I need to reinforce the ponytail for all day wear. I DID style my own Crimson Viper wig (which is hard) but it didn’t last a super long time.

I’d love to do this too! I like glowy bits.

I still don’t really know how people go through the whole process of scheduling photoshoots and getting really great cosplay photos. I’m trying to get better about this, with the contact cards and stuff, but I’m a noob to this side of things.

Advice appreciated on this, seriously. Hit me up on Twitter, that’s easier than commenting here. (@lita_gemini) And if you want to see what actual photos I do have, you can peep my insta (@amandajlange)