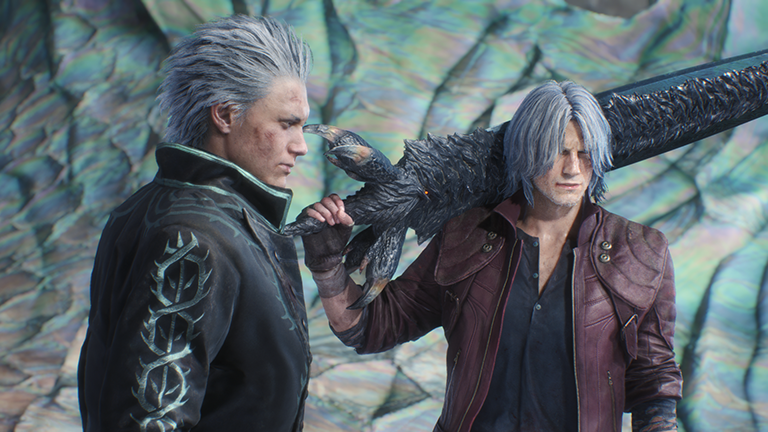 A few years ago, I wrote a pretty good post about working out and losing weight. I’ve drafted an entire follow-up to that post. But I struggled to edit it to something I felt okay posting. The short version is that after getting off the paleo diet and going to a more balanced diet, I put back on about 25 of the 50 lbs that I lost. Not all of it, but enough that I’m not happy with my current size. It’s not for lack of trying: I’m religious about the gym, relentless about tracking my intake, and measure and monitor every little thing. But this stuff is hard, and it’s entirely possible that a) I’m going to need to cut out every carbohydrate again to make any progress on weight loss, or b) my body has simply decided on a “set point” of size which is, frankly, about 40 lbs heavier than I am genuinely comfortable being.

I’ve been fighting with this a lot. I can’t look at myself in the mirror and have any idea of what I look like anymore.

For most of my life I’ve been involved in some form or another of text-based roleplaying online. Either you know that about me or you don’t. I generally communicate about that hobby only with other people who are also involved in that sort of hobby, because it’s terribly niche. It’s a great creative outlet for me, except for when it isn’t. When it isn’t, it’s rough and I can’t entirely separate my feelings about myself from my feelings about things I’m writing.

I had stumbled quite accidentally really into writing for a female character that was supposed to be physically attractive, a sexy bombshell sort. In the past, I’ve navigated this by playing a character as almost a drag parody of femininity. Those portrayals never tended to stick to me for a long time. I wanted to do better. But I wrestled with how to write “sexy woman” in a way that came across as genuine and real rather than awkward or clumsy, or mouthbreathing and offensive. You see a lot of bad examples out there (Just Google “men writing women” if you must). It didn’t help that, at the time, I was struggling with body dysmorphia, and not feeling beautiful in my own right. It was frustrating.

A friend said “if you want to portray someone sexy, you just write what you think is sexy to you, and it will come through.” I tried to apply this advice… but I still felt awkward. 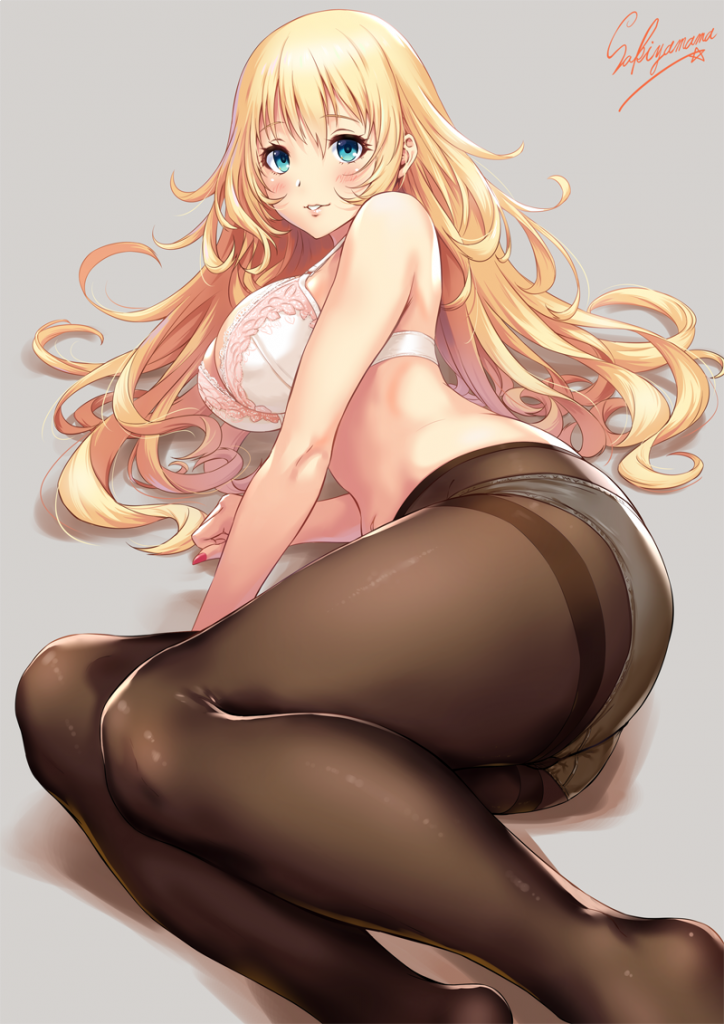 I actually really enjoy looking at fantasy depictions of women, even and especially the high-femme sort. I look at them and I think, yes, that’s sexy. But as I have been struggling with my weight, I really started to see such depictions in a different light, one that made me feel bad about myself. I kept questioning: do I measure up? Could I cosplay this character? Could I write for this character? I don’t know if I can do it. I don’t know if I’m woman enough.

Eventually it really sunk in for me that the thing is, I am straight. It feels odd, especially on the eve of Pride Month, for me to want to  strongly reassert it. But a lot of the geek communities I am present in are dominated by men. And many of the women are queer-identifying as well. As a result, it seemed to me it was not really normalized to be a person who is primarily attracted to men. I know there are plenty of geek communities dominated by straight women, but for some reason or another I had not previously gravitated toward them. In the communities where was I present, I was starting to feel a bit alienated due to my identity. I don’t belong with the straight men, but I also do not identify as a queer woman. I needed something new.

It was actually a little bit before PAX last year, where I had really come up with the notion to go a different direction… if I should write “what is sexy to me” I should be writing for a man. 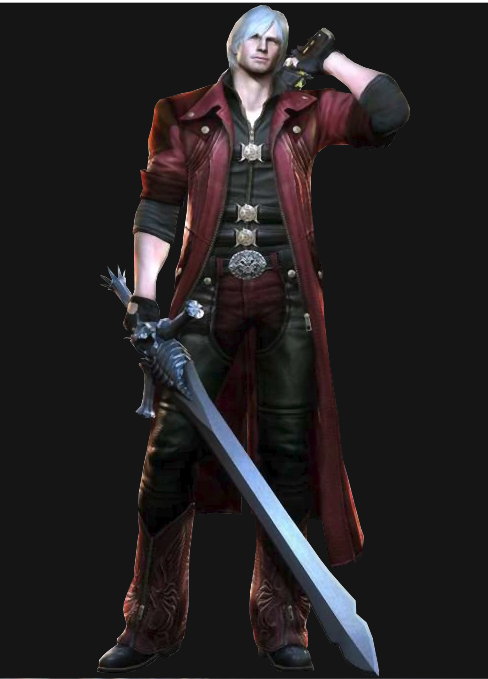 I had entirely fallen out of Devil May Cry by the time the ill-fated reboot was launched, and I had no idea what to expect from the new game coming out. When I went to sit at the panel at PAX West, showing previews and action from DMC5, I felt a rush of impostor syndrome. Can I really count as a fan of this series, when I hadn’t even touched the games since 3 came out a long time ago? And I wasn’t even good at them back then! Not to mention, I think I want to “write” this character, but I don’t know that I know him backwards and forwards, and I worry a lot about how to do things well, even silly inconsequential things.

I walked into that place feeling unsure, and I walked out feeling happy, determined… at peace.

The new game hadn’t come out yet; I was watching cutscenes of the older ones and remembering how things went and trying to get down something like a portrayal. When I felt shitty about myself for a while, or scared to try something new, I told myself that Dante wouldn’t be afraid. After PAX I traveled to a foreign country, halfway around the world, where I didn’t even speak the language. I got on a snowmobile in a Utah blizzard. And yeah, I wrote some goddamn fanfic.

And then, when it was time, I actually learned how to play Devil May Cry.

City of Heroes was my favorite MMO to ever exist. Years after its official shut-down, just these last few months, a private server was relaunched using a dump of the original game code. This is a legal-gray-area sort of situation and technically a piracy of the game but since the game is not around anymore in any version one can pay for, some of us veterans have been enjoying visiting the private shard. It seemed as if everyone was using the character generator in part to recreate their favorite characters. I said, “I CAN’T do that – I am so embarrassed for myself that I’m even thinking about it,” but, yeah, I did. I did that thing. 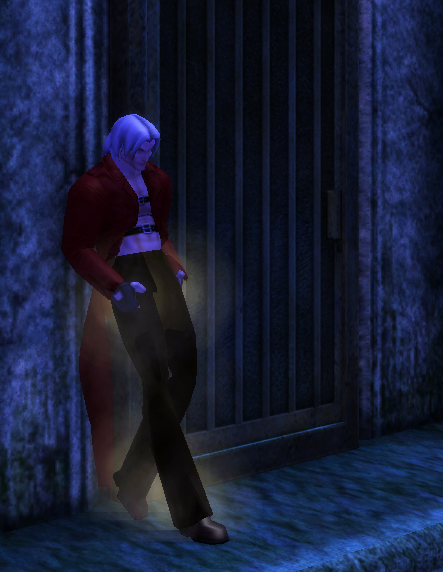 The build is Scrapper, Titan Weapons/Regen. Regen because I was quite familiar with it on Live, and it’s thematically suitable, coming with a Devil Trigger in the form of the Moment of Glory power. TW because I didn’t get a chance to play with it on live and it looked fun. You can do a pretty solid Devil Sword approximation. Broadsword could just as easily be justified but wasn’t as new and shiny. I could probably also see Brute for this build (Combo meters and all)…. And I’ve seen someone else do it with Dual Pistol Blaster, but I associate the Blaster class with fragility and I didn’t think it was quite bang on either. I lament the lack of guns but I’m filling it out with temp powers. That’s my aside about the build. 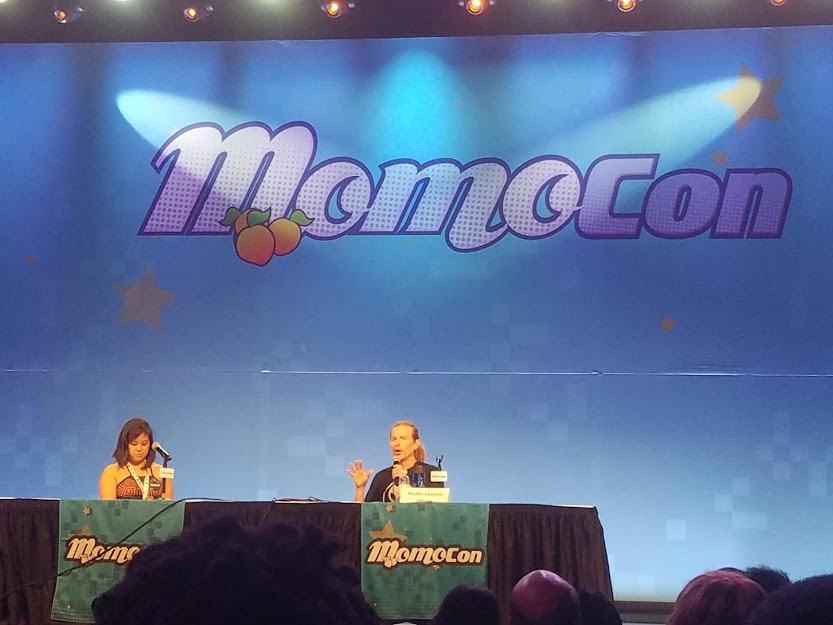 Now two weeks after that… I’m at MomoCon in Atlanta and I’ve been standing in line for about two hours to get an autograph from Reuben Langdon. He’s a stunt man who has been in a lot of films but the primary thing for me is that he does the voice and motion capture action for Dante across most media. When I’m in a line I like to chat with other people and hear their stories. The girl in front of me is here on behalf of her boyfriend, who wanted Dante’s autograph but couldn’t be here. Another girl says she’s dressed up as her DMC “OC” today, which makes me feel a little less weird about the fanfic-roleplay. It was certainly a place in time where I stood and reflected on how quickly things had happened. I had attended one panel last fall and gotten hooked and now I had come here, on purpose, to be here and do this.

The day before, I attended Reuben’s panel on the DMC series. Having become such a big fan of it now, seeing all the behind the scenes footage was an absolute riot. While he was talking about the process of being cast, Reuben said something to the effect of, “I don’t really do a voice for this character; it’s just my regular voice.” And I thought, but, huh, he doesn’t really sound like Dante in person… not because he’s doing a voice, but because the character is still a performance. It’s a broad, physical, theatrical performance, which one has to either turn on or turn off. In a way, it’s almost like a drag parody of masculinity. That’s quite rare in media and I guess that’s what makes it so much of a delight. At the moment, it struck me.

My husband said before I waited in line: “When you get up there, you should tell him.” – But, like, what would I tell him exactly? The whole thing is a story too weird and geeky to tell.

What I said in the moment at the signing line was a much simpler version, something like: “Hey, you’ve probably heard this one before, but the game this year meant a lot to me. It was the right thing, at the right time, to help me break out of some depression I was feeling, and I want to thank you for your contribution to that.”

And I also said, “I don’t have boxed copies of the games anymore, so, I had to pick up a poster at this con and you have to forgive me because it’s kind of awkwardly sexy.”

To which he said “Well, that’s Dante, right, everything about him is kind of awkwardly sexy. I’m just going to write ‘jackpot’ right on the crotch.”

I might have been a little too happy about that. 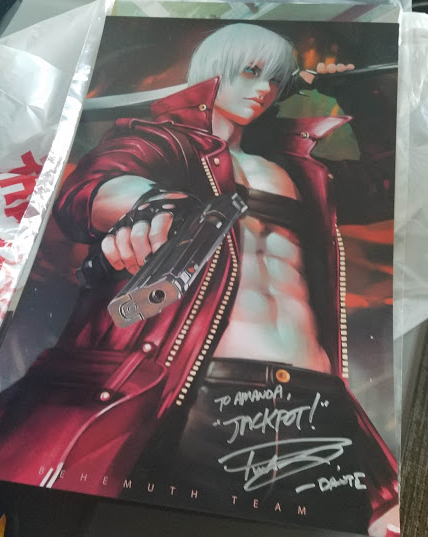 So I got a photo as well, and I’m smiling like crazy. As I was walking away, the last thing he said was just: “I’m glad I could help you with, uh, whatever you were going through.”

That was the point of maximum emotion, because… yeah, the thing I was going through was silly and also too complicated to really explain, which I knew it would be, which is why I didn’t. And the fact that my problems with myself and my esteem are mostly in my head crashed upon me like a wave.

But also, that was the point where it finally hit me that the voice in my head for the last six months, the one I’d been tapping for internal courage, to remind myself that I was valuable and valid and brave and was going to be okay: it was that voice after all, exactly the one that I just heard, just now.